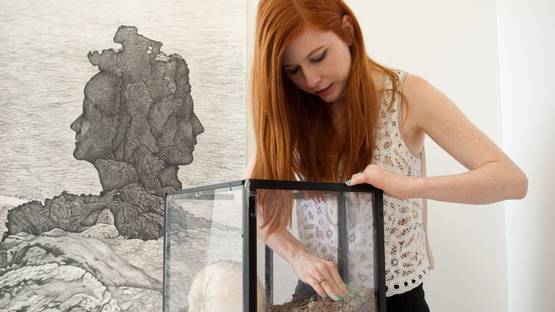 Colette Robbins is an American artist, born in St. Louis, a city in the U.S. state of Missouri. Her work is influenced by her interest in human psychology, memory, and The Rorschach test.

The medium in which Collete works is often somewhere between drawing and painting. She creates her works by using a technique inspired by the glaze painting of the Old Masters. Robbins diligently layers graphite washes, and when the surface dries, she erases or sands the painting in order to create more highlights and details.

She works center around the archetypal symbols and the Rorschach inspired inkblot shapes, which she uses as a format for the universal landscapes. Her images focus on remnants of the figure and remains that survive, leaving the viewers to wonder who has abandoned those objects or fossils and what should be done with them.

Colette Robbins received her Bachelor of Fine Arts degree from the Maryland Institute College of Art in Baltimore in 2003, and four years later, earned her Master of Fine Arts from Parsons, The New School of Design in New York City in 2007.

Collete Robbins has taught at Hofstra University, Art Institute of Pittsburgh and Parsons, the New School for Design in New York City. Her art has been included in numerous renowed magazines and received several awards. The artist has been exhibiting her works worldwide, but mostly in the United States, since 2003.

Colette Robbins is currently based in Queens, NYC.