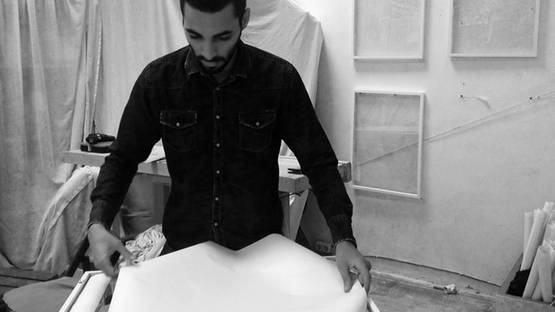 COMBO, or Culture Kidnapper, is a French street artist who started by doing graffiti art in 2003 in the South of France. After seven years spent painting from Monaco to Marseille, he moved to Paris in 2010 and became an art director at a major advertising agency. Putting his spray paint cans aside, he then started doing wheat paste.

Combo, born in the northern town of Amiens, to a Lebanese Christian father and a Moroccan Muslim mother, is seen as a symbol of the diversity of French society – he was present at the vast Paris street demonstration of solidarity after January’s terrorist attacks and since then has been trying to use street art to blast cultural stereotypes.

COMBO began making street art the day when he wanted to take his revenge against one of his professors by painting her car… but (un)fortunately he didn’t find her car on the school car park!
COMBO had a lot of paint at this time and lots of adrenaline, so he painted out his entire district and his High School.

He was around 16 years old when he created his first piece of art. Always working alone, he describes himself as a « street professional » but compared with others, he’s doing this for free.

Combo’s work focuses around culture and visual jamming, as illustrated by his cartoon series in which he manipulates iconic pictures, replacing some elements by others taken from the comics or the video games universe to change these pictures' meaning according to what he wants to express.

By appealing to generation Y’s pop culture, Combo hits his target at heart and takes it back to the unfairness that makes our world - whether cultural, financial or identity-related.

Committed street artist, COMBO got noticed by the media in 2012 when he introduced himself in the Chernobyl Exclusion Zone to paste up real advertisements that vaunted the nuclear industry - his way to celebrate Fukushima's disaster first birthday.

Strongly influenced by the cartoon and the video game universe, he also put up a massive Simpsons mural, where "America's beloved animated family seems to be having a great time, picnicking on a grassy mound, all while Homer's nuclear power plant is seen menacingly in the background. The Simpsons piece, though, has somehow been the only one that international media relayed.

The majority of COMBO's work is made of wheat pasted prints that he unpastes and then pastes back on canvas, giving it a true street feel. Whatever their size and as an advertiser would do, he always manages to get his work to be seen by as many people as possible.