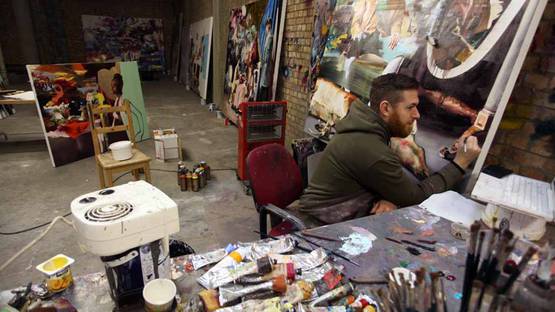 Conor Harrington combines street art with realist painting. This Irish born artist did graffiti in his early days and he still enjoys painting outdoor murals but keeps on track with completely new and inventive form, mostly in gallery settings. He uses an inside-outside way to present his work. Both on the streets and in the galleries. Conor’s early work inside this form involved cutting-edge graffiti techniques with an aim to create multi-layered artworks, akin to abstract expressionist artists’ works. This is the point where radical street art movement met an anti-figurative counterpart of the early and mid-20th century.

It wasn’t before the mid-90s that Conor included male figurative aspects. For example, in his work titled The Rum and Raisin of Irish Society, one young contemporary metropolitan man juxtaposes with the classic masculine identity. On the other hand, some male icons he used, like for example Formula One drivers, are meant to examine and explore that universal tendency towards machismo at the peak of the gender role crisis today. One characteristic of his inside as well as of his outside pieces is that he usually depicts images of people in a realistic manner while incorporating some abstract elements. By using a bold line in his work, together with exquisite shading and bursts of color, he creates a precision surface and texture in illustrations of the human form. A darker color palette Harrington chooses presents an alternation of obscured and revealed parts of the figure on the painting. A large scale of sharp lines next to the softer image of the human form is his way of modernizing what could be interpreted as a more classical image. He clearly has a message for the audience (or better said, he opens a resonant dialogue with the viewer) and by tackling socio-political themes - he stands tall among this new breed of young people that use fine art techniques in a context formerly reserved for street artists.

In his inside and outside pieces, he depicts realistic images of people, while inserting abstract elements

In 2008, Harrington’s exhibition Weekend Warriors opened a new era for him – for the first time he showed costumes and other historical descriptors such as Europe's uniforms of the 16th century. These historic clues were meant to examine current affairs and conditions in the world. A piece from this series titled Saint with the Powers of Superman illuminated a modern man's fascination with his own personal fights he might be battling inside – in the context of these day’s war that are waged simply by a remote control. For 2012's Dead Meat exhibition, that took place at Lazarides Rathbone, Conor was inspired by the Regency-era costumes on, once again, contemporary models. He even included the pin-up models for the female nudes, telling the story of one pretty hedonistic banquet. However, this lavish feast symbolizes the end of global Anglo-Saxon influence in the present day. Some metaphorical visual cues are also a part of this series, following the example of a Renaissance-era old master painting.

In the Weekend Warriors exhibition, he showed historical elements such as war uniforms

A Whole Lot of trouble for a Little Bit of Win show was held in 2013 at the same gallery as Dead Meat. This exhibition actually profiled his notable study paintings. Next year, in 2014, Eat and Delete show introduced Instagram as a part of the vision – Conor has been updating his Instagram with photographs of a progress and the entire process of preparing this show. Eat and Delete was planned to come to life at a previously undisclosed pop-up location in Manhattan, being so his first solo exhibition in New York. All in all, the show surprised the viewers by introducing a different kind of visual experience – during the whole exhibition, a series of short films were on display. Most of the video material was made in collaboration with film and music maker Andrew Telling and included some of his previous documentary works, as well as the original recreation of the dramatic narrative throughout the film.

During 2015, Harrington’s oil and spray paint piece on stretched linen titled Dance with the Devil was sold for amazing $116,413 at Bonham’s Auction. Even though this painting had an estimated pre-sale price between $45,000 and $75,000 - it was sold for more than, for example, Rude Copper on the same auction, a piece by Banksy himself, sold for $48,800. The additional curiosity was the fact that this was the first time that he ever had his work up for auction. Conor’s works can be found all across the globe, from the United States and the United Kingdom to Norway, Spain, and the Bethlehem Wall.

He is represented by Hang-Up Gallery and Lazarides.