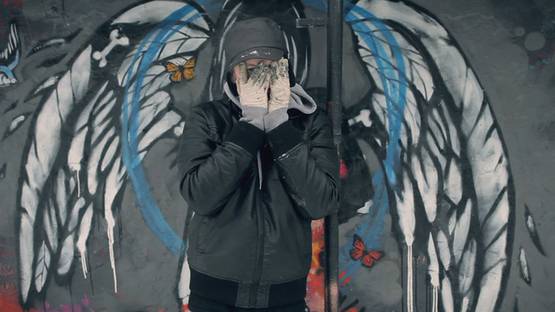 Copyright is a British street artist who has been spray painting for the last 10 years but have been into art his whole life. In 2004 when he got the name Copyright he started painting roses all over.The word is that one Valentine ’s Day he sprayed pink roses along the route his girlfriend took to work.

After being influenced by the eclectic music and more importantly videos of Aphex Twin, The Beastie Boys and Bjork in the late nineties Copyright decided to study photography and video production at his local college. It was here he discovered a seemingly limitless supply of art materials he could ‘borrow’ to create his own paintings. It was soon after he had his own eureka moment when he realized he could turn his photographs into stencils. When his source of free supplies finally dried up he turned to the streets as a new free canvas. It was in this very public domain that his work began getting noticed and it wasn’t long before his first showing at a gallery. Many years later with no formal art training or qualifications he is continuously experimenting and pushing his work forward, mixing new materials and techniques with his trademark style with the resulting paintings being as much fine art as street art.

Over the last decade Copyright has been invited to show his work worldwide including sell out solo shows in London and Tokyo and most recently his Precious Damage show which saw him sell all 50 works in 3 hours. He was asked to design the cover of Reload Magazine to go alongside a feature about his art, as well as pieces in Harpers Bazaar, Teen Vogue and Modart amongst others. He was featured on Series 8 of the BBC show ‘The Apprentice’ in May 2012 after being selected by the contestants as part of a task based on street art. His highly stylized work and unique style has proven popular with both national and international collectors including a number of celebrities and Premier League footballers.

Most of his works can be found in Bristol and Newcastle, and some even in Harajuku and the Shibuya areas of Tokyo.