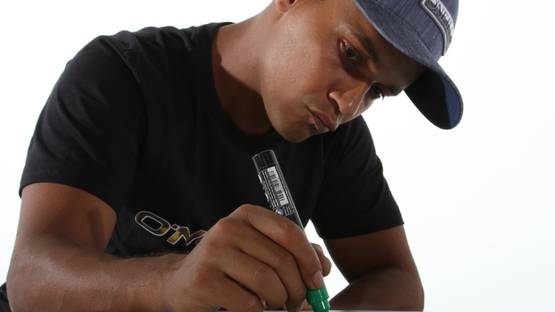 If you’re an artist working in the streets, they are so much more than a simple location for your art. Streets become your window to the world, a way to communicate with the others, to tell a story about yourself and that you deem is important enough. Fabio de Oliveira Parnaiba, better known as Cranio, is a Brazilian artist who began his artistic journey on the streets of Sao Paolo. In addition to the beautifying his home city, and many cities throughout the world, he also started painting. The blue Indian characters have become his trademark. It all started as his desire to show the indigenous people from Brazil and all the troubles they’re facing in the unforgiving contemporary world, but the process has outgrown its original idea, and the characters and the situations they’re finding themselves in are now almost universally applicable.

Between Cartoons and Dalí

His mediums are acrylic on canvas and spray paint on walls, but he likes to mix them up a little, so some of his artworks are spray paint on canvases. All of his characters are reminiscent of Brazil, whether they are wearing a sports jersey or carrying a Brazilian flag, but the themes Cranio explores are universal. Inspired by the life around him, he tackles the issues of political corruption, environmental disasters, or the ever-present and never-stronger consumerism. His themes are dark indeed, but instead of depicting the things exactly as they are, he rather includes the elements of humor, making them easily digestible without giving up on the significance or the power of the messages that the artworks are sending. The artist is heavily influenced by cartoons and the work of Salvador Dalí.

The artist is inspired by the life around him

His moniker is actually his childhood nickname he got while he was in school. He was the smartest kid in his class, so the other kids named him Cranio, someone with a big brain. Cranio means Skull in Portuguese and Brazilian. He began his art journey in 1998 by writing his name on the walls, influenced by graffiti from other artists he saw around the city, like Os Gemeos. It wasn’t long until he started drawing characters that gave a bit of humor to the grayness of the concrete walls. He’s a self-taught artist, who learned everything he knows about the art on the streets. Over the years, his technique and context, which are essential for his work, have improved drastically, without affecting the sharpness of the style he’s known for.

A Little Bit of Luck

It was luck that he was born in Sao Paolo, a city with a very strong culture of graffiti and a capital of the graffiti world today, according to many art critics. Cranio’s work is a mix of street art and fine art, where he depicts his own life, everything he sees, hears, or lives through. There is a lot going on in the world today – a lot of good, but a lot of bad as well. The artist takes great pleasure in criticizing everything he deems wrong.

He is represented by Vroom & Vaorssieau in Amsterdam.