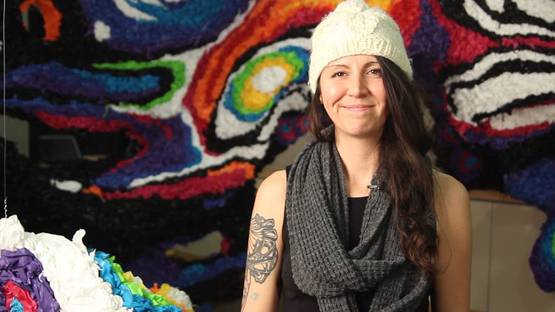 The expansion of forms through space is what triggers Crystal Wagner the most and marks her artistic practice being perceived in as an installation art. The constant struggle of two and three-dimensional forms in this particular case is an advantage; a ground zero from which the whole concept develops. By using different techniques such as printmaking, Wagner constructs massive site specifics which seem to be reflecting the artist's interest in the living world we are often not capable of perceiving. As a matter of fact, the spaces are being transformed into mysterious living entities which are devouring different elements of architecture and street infrastructure.

The Escape From Academia

Crystal Wagner was born in 1982 in Baltimore, Maryland. She attended Keystone College, a private liberal arts school in Pennsylvania where she earned her Associate Degree in Fine Art. Afterward, Wagner received her BFA from the Atlanta College of Art in 2004 and an MFA from the University of Tennessee in 2008. Interestingly, her thesis exhibition led to the purchasing of one of her large sculptural forms by the Knoxville Museum of Art. Crystal Wagner taught as an art professor at Georgia College of Liberal Arts for five years, but then she decided to focus exclusively on her artistic career and quit her job since her artistic work was becoming increasingly popular.

Distinct approach to color and material

Drawing The Inspiration From Nature

Wagner’s interest in art began from early impressions on the natural world. As a child she started drawing imaginative birds, while years later during her studies, she spent four months in Yellowstone National Park in Wyoming, experiencing the diverse terrain of the elevated landscape, studying and drawing from nature in the backcountry. Therefore, her amorphous installations are filled with a vibrant array of colorfully unique shapes, details, and textures. They are all manually processed, designed and prepared specifically for a particular place which is practically being taken over by the work. Besides the installations, the artist has been producing peculiar shadow boxes respectively paper sculptures.

The massive, immersive forms of Crystal Wagner overwhelm the space

Her most recent commissions include a large-scale installation for the internationally recognized band The Flaming Lips. a large shadow box for GNU a snowboard company out of Portland, a large-scale installation piece for NIKE, presented in the Shrine Auditorium for The KOBE X Blackout Experience, and most recently two installations for Viacom, one of which is called Wild Efflux and located at their headquarters in Times Square. It is the 117-foot-long piece, accompanied by what the artist calls terrariums – small, framed paper sculptures that resemble portable worlds.

The whimsical and immersive body of works

In 2016 the Polish UNIQA Art Łódź organization commissioned the installation from Wagner. The concept she delivered was embodied as a wild exterior growth that wraps around the art nouveau façade of a 100 years old building in Lodz. The apparent fascination with the site led the artist on creating the dialog between architecture and organic forms and structures found in nature. Namely, this is an extension of her exploration aimed to question juxtaposition and context of our relationship with cultivated spaces/structures and the natural world. The work is made of thin metal, wire and UV and waterproof Ripstop material, which is used on professional kites.

The Success of Installations of Crystal Wagner

In the last few years, the artist had several solos and participated in various group exhibitions. Wagner’s rising career was additionally flavored with received grants among which the important ones are the Pollock-Krasner Grant from 2015, as well as Awesome Foundation Art Grant in the category Awesome Without Borders. The artist was honored with the Sculpture and Installation Award of the SEE.ME, Art Takes Paris, international art competition. Without the doubt, the outstanding approach to installation well-thought concepts and minutely executions are characteristics which make the art practice of Crystal Wagner quiet authentic and on the height of the task.