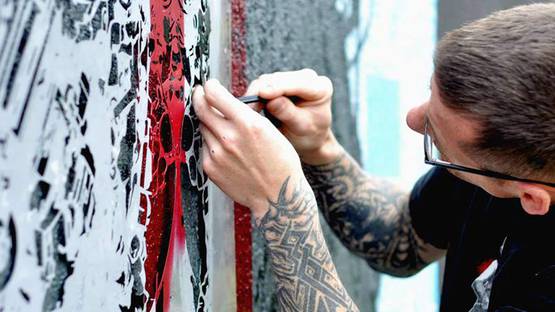 Czarnobyl is a Polish self-taught artist born in 1974 who has been concentrating on stencils for more than 20 years. Czarnobyl’s works want to remind us of the technological progress and its’ unfulfilled promise of a better future. His creatures are completely torn, lonesome but oppressive as well as nostalgic and not yet in a common sense beautiful. Czarnobyl’s protagonists appear much more as mutated outsiders of an evil and unequal game like the mutants of the Megapolis.

“My nickname used to be Czarnobyl and I experienced the catastrophe there. Czarnobyl is an expression of a sick society, a society of which I am a victim myself.”

In his works Czarnobyl combines his meticulous and precise portraits with found stencils and detailed machine illustrations so that they sometimes remind us of scurrile psychologie of Rorschach-tests. By layering, mirroring, overlapping and a continuous redevelopment of his stencil works Czarnobyl managed to create his own language of forms, which is innovative and modern as well as relevant to society.

In the early 80’s the polish born artist Czarnobyl starts to make his first stencils followed by a Berlin of the 90’s with its’ punk and squatting scene during which time the artist, influenced by the capitals graffiti scene, starts to communicate his emotions within the urban space.

“Back then I was involved in the punk scene. We used to call everything, stencils, posters and such, graffiti. I guess it must have been around the late 80s. Our subjects revolved around punk culture and politics. One of my first pieces was the word "Zaraza" (polish for plague) painted with a clogged can in which I had squeezed a nail. We used to manufacture our own cans by either working pigments into cans of insecticide or by fitting valves to holes drilled into empty cans and pressurized with a bicycle pump.”

Nowadays Czarnobyl bases his projects on photos. Often he searches for new shapes in existing stencils by mirroring parts. “I still enjoy the challenge of a complex project. Due to the nature of my work and the amount of precision I want to achieve I prefer something portable as opposed to lugging huge stencils around town at night time.”