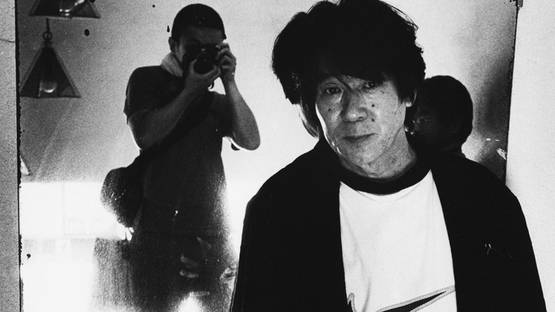 Daido Moriyama is a prolific Japanese artist, well-known as a photographer, graphic designer, and writer.  His photographs epitomize wabi-sabi, the Japanese aesthetic of finding beauty in imperfection. Moriyama focuses in on the lost and the discarded, and finds echoes of living through the breakdown of traditional values in post-war Japan.

Moriyama was born in 1938 in Ikeda City, Osaka, Japan. He studied photography at the Takeji Iwamiya studio in Osaka before moving to Tokyo in 1961 to meet the members of VIVO. Moriyama became an assistant to Eikoh Hosoe (Japanese, b.1933), and gained access to the Tokyo photo world through this position.

In 1968, Moriyama produced a collection of photographs, Nippon gekijo shashincho, in high-contrast, in which he focused on the indigenous world or the few indigenous things that had not been corrupted by the rapidly industrializing world. Around the same time he produced this collection, he began to draw the attention of many young and aggressive artists, most of them photographers, by becoming involved in the group magazine Provoke. Other artists who also participated in this group magazine project include Koji Tagi (Japanese, b.1928), Yutaka Takanashi (Japanese, b.1935), Takuma Nakahira (Japanese, b.1938), and Takahiko Okada (Japanese, b.1939). Apart from Provoke, Moriyama also contributed to other magazines, such as Camera Mainichi, Asahi Journal, and Asahi Camera.

His collections of photographs, which portray vivid physical sensibility, are numerous and include Hikari, Karyudo, and Nakaji eno tabi. Moriyama has an uncanny ability of discovering isolated and often neglected parts of cities and exposing them to the world through his photographs. In addition, most of his photographs, which mainly consist of familiar objects and scenes, are viewed in harsh brilliance.

In the 1970s, Moriyama was plagued by personal problems and was not productive in matters of art, only regaining focus in the early 1980s, and even being awarded the Photographer of the Year Award by the Photography Society (Shashin Kyokai). He has exhibited in various institutions, such as the San Francisco Museum of Modern Art in 1999 and the New York Museum of Modern Art in 1974.