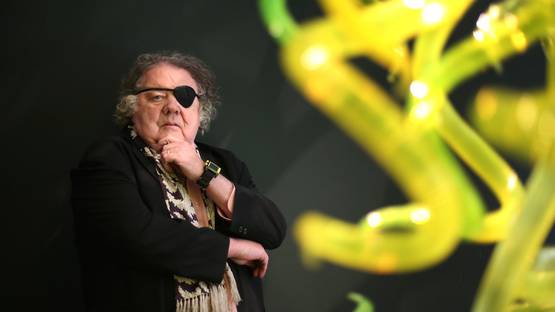 Dale Chihuly is an American artist and glass sculptor. He uses glass as the primary medium for his installations and large-scale sculptures.

Born in 1941 in Tacoma, Washington, Dale Chihuly was introduced to blown glass technique and learned how to melt and fuse glass while studying interior design at the University of Washington, in 1961. In 1962, he drooped out of school to study art in Florence. He later traveled to the Middle East and met architect Robert Landsman. Their meeting and his time abroad spurred Chihuly to return to his studies. In 1963, he took a weaving class where he incorporated glass shards into tapestries. After graduating in 1965, Chihuly enrolled in the first glass program in the country, at the University of Wisconsin. He continued his studies at the Rhode Island School of Design, where he later established the glass program and taught for more than a decade.

Chihuly created several remarkable series of his work over the years, like Cylinders and Baskets in the 70s, Seaforms, Macchia, Venetians, and Persians in the 80s, and Niijima Floats and Chandeliers in the 90s. He used his Cylinders to create glass-thread drawings on vessels inspired by Native American textiles. Colorful threads are carefully laid out in an intricate design and fused onto the vessel when it is in its molten stage. Baskets were inspired by Northwest Coast Indian baskets, struck by the grace of their slumped, sagging forms, capturing this grace in glass.

On several occasions, Dale was forced to stop his work progress. In 1976, while Chihuly was in England, he was involved in a car accident during which he flew through the windshield. His face was severely cut by glass and he was blinded in his left eye. After recovering, he continued to blow glass until he dislocated his right shoulder in a 1979 bodysurfing accident. No longer able to hold the glass blowing pipe, he hired others to do the work. Chihuly explained this change, saying ‘Once I stepped back, I liked the view’. This accident allowed him to see the work from more perspectives and enabled him to anticipate problems faster. Chihuly describes his new role as ‘more choreographer than dancer, more supervisor than participant, more director than actor.’

Venice has been the city crucial for Chihuly’s work. His Venetian series is an homage to Italian Art Deco vases, it’s aesthetic and symmetry. In 1968, after receiving a Fulbright Fellowship, he went to work at the Venini glass factory in Venice. There he observed the team approach to blowing glass, which is critical to the way he works today. In 1971, Chihuly cofounded Pilchuck Glass School in Washington State. With this international glass center, Chihuly has led the avant-garde in the development of glass as a fine art. In 1995, he began Chihuly over Venice, for which he created sculptures at glass factories in Finland, Ireland, and Mexico, then installed them over the canals and piazzas of Venice.

Chihuly’s work is exhibited in more than 200 museum collections worldwide, including in the United States, Canada, England, Singapore, the United Arab Emirates, and Kuwait. He has been the recipient of many awards, including twelve honorary doctorates and two fellowships from the National Endowment for the Arts.