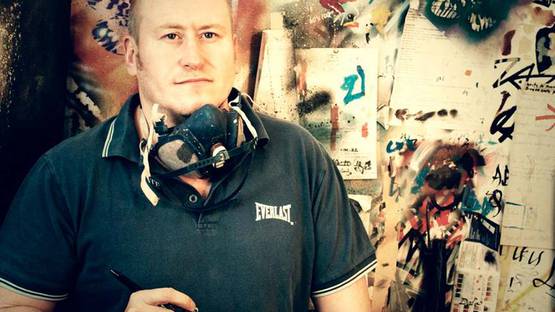 Dale Grimshaw is a British street artist and painter who uses oils, acrylic, spray paint or woodcut prints to make powerful works that are full of strong emotions, aiming to show viewers experiences of the visual world as they truly are. Born 1971 in Lancashire, Dale has studied at Blackburn College of Art and earned his Bachelor of Fine Art degree at Middlesex University. He has established himself over a period of six years as being one of the most respected and individual artists on the London art scene. Collectors and buyers have appreciated his distinctively direct and passionate style internationally.

“ I always have this crazy idea that there’s this really clever and grand master plan or concept that I need to capture in my paintings, when in fact my work tends to operate the best and pack a powerful punch when it’s based on personal emotions – fear, alienation, frustration and anger to name a few. I try to capture what I call a psychological narrative in the work. “

Dale started painting and using pastels at about 12 . He was always obsessed with graffiti and he used to tag ‘Dale G’, then later he became ‘Grimmy’ . He wrote on walls, playgrounds, bus seats, textbook covers, and his own body even. His work really started taking off when he realized that it was ok to express some of the darker emotions in his art. His piece called ‘Exorcism’ is the first piece in which he found his creative voice and it’s still one of the most powerful images he has ever painted.

In Dale’s early college days he was mainly an oil painter and he started seriously again with oils after his mum died. However, as time has gone on he has found that this medium doesn’t suit all his needs in the studio: “It’s a shame because I really love the feel and finish of oils, but I work with a lot of splashes, smears and gestural brush marks. I found acrylic paint really suits this approach better, due to its accelerated drying time.”  He also uses spray paint, especially when he is painting on outside walls. According to Dale, spray paint is good for blocking in big areas quickly and it also dries really fast so you can work over it with other types of paint.

Grimshaw also produces big woodcut prints that he pastes up out on the streets across the world. The ideas for paintings are often based on memories or experience, but usually the paintings are more of a loose interpretation rather than being a really literal depiction. He does a lot of digital sketches before he start painting. “If I’m working on a full color painting, as opposed to monochrome, then I like to have lots of detail of the skin areas. I love to capture the real visceral fleshiness of the human form – the veins and muscle underneath the skin, if I can.”

Dale had his first solo show "Echoes And Exorcisms" at Signal Gallery in 2008. This show was extremely successful and he rapidly became one of the leading up-and- coming artists in the London Urban Art scene. This led him to being invited to take part in a number of festivals across the UK, where his outdoor work created quite a stir. More recently, he has contributed to the Street Art scene with a series of striking and dramatic woodcuts prints that he has pasted up in London and Europe.

Dale has contributed works to several high profile charitable events, notably the Street Art awards where his work was chosen to feature in an article in The Independent newspaper and on the BBC. Dale’s work has been seen in a number of group shows internationally in Paris, Berlin and in the USA.