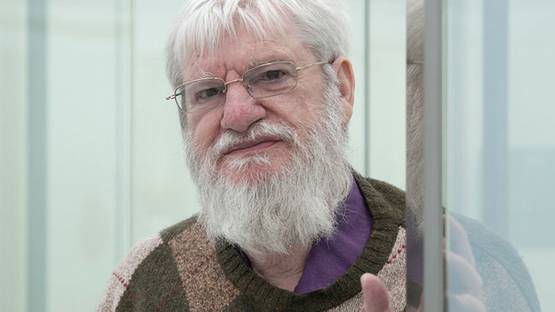 An American artist, writer, and curator, Daniel "Dan" Graham is best known for his integral role in beginnings of Conceptual Art during the 1960s. For decades, he has been tracing the symbiosis between architectural environments and their inhabitants.

Born in 1942 in Urbana, Illinois, Graham grew up in New Jersey. He had no formal education after high school and is self-educated. In 1964 he began directing the John Daniels Gallery in New York, where he put on Sol LeWitt's first one-man show, and in groups shows, exhibited works of Donald Judd, Dan Flavin and Robert Smithson. Like these artists, Graham considered himself a writer-artist, publishing essays and reviews on rock music, Dwight D. Eisenhower's paintings, and Dean Martin's television show.

His multi-faceted work consists of performance art, installations, video, sculpture, and photography. His earliest work dealt with the magazine page, predating but often associated with Conceptual art. His work often focuses on cultural phenomena, and incorporates photography, video, performance art, glass and mirror structures. Graham’s critical engagement manifests most alluringly in the glass and mirrored pavilions, realized in sites all over the world, which highlight the voyeuristic elements of design in the built world.