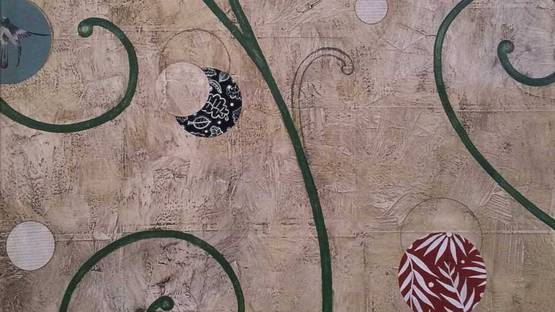 The American artist and musician Dan Rizzie is a skillful and inventive painter, known for his detailed collage work and the textural quality of his surfaces. His multifaceted mixed-media pieces are often influenced by the rhythms of the natural world, incorporating materials such as flashe, parchment, printed materials, and newsprint.

Born in Poughkeepsie, New York in 1951, Rizzie grew up in India, Egypt, Jordan and Jamaica. He received his BFA from Hendrix College in Arkansas in 1973 and his MFA from Southern Methodist University in Dallas, Texas in 1975.

Rizzie uses a range of materials in his work, from layers of newspaper to paint, wax and dirt, often incorporating filigree, historic decorative patterns, and bold botanic imagery. Informed by his extraordinary knowledge of art history, but in off-beat, even eccentric ways, his art combines a rather hermetic element in his signs and symbols and his love of collage. Deeply connected to the natural world, his symbols display a range of associations from microscopic views of single cells to floral portraits influenced by the tradition of English botanical illustration, but also organic, geometric patterns. Expressing a uniquely individual set of feelings, Rizzie’s vision is as truly sui generis as it is possible for a traditionally grounded artist to be.