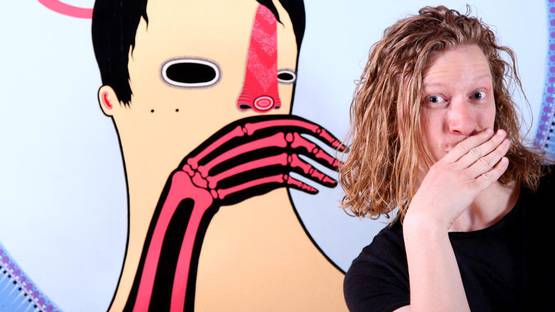 Dan Withey is an Australia-based British artist who combines bright and eccentric painting style with his strong stance against globalisation and consumerism. Self-taught, Withey mainly works with acrylics and spray paint on recycled board.

His paintings are highly imaginative works imbued with a playful humour and ungraded emotion usually focusing on human and animal forms combined into creatures that are neither one nor the other. His eccentric characters and an instinctive use of bright colours are often inspired by lifestyle of Native Americans that represents complete freedom; something modern society has lost.

Born in 1986 in Birmingham, the United Kingdom, he moved to Australia in 2004 where he obtained his BA in visual communication specialising in illustration from the University of South Australia three years later. Whilst studying he won first prize in the Design Institute of Australia student of the year awards in the Graphic Design category.

The Adelaide-based artist is represented by 19 Karen Contemporary Artspace. In August 2015 he participated in international group show Pain-Ting, organized by the Queensland-located gallery and hosted by Open Walls Gallery in Berlin.

Dan Withey is currently based in Adelaide, South Australia.