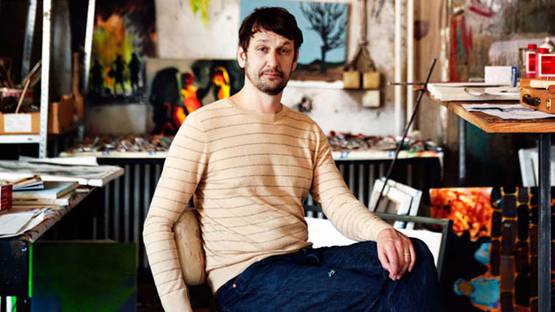 Daniel Richter is a German renowned painter known for his deconstruction and recodification of art history. Richter was born in 1962 in Lütjenburg, Germany, and studied at the Hochschule der Bildenden Künste in Hamburg from 1991 to 1995. From 1992 to 1996, he studied with Werner Büttner, who was one of the artists responsible for the revival of expressive trends in painting during the 1980s, as well as assistant to Albert Oehlen. Richter was a professor of painting at the Universität der Künste in Berlin from 2004 to 2006.

In his early career, Richter did mostly Abstract paintings, in which he tended to use so many colors that some people considered his work to be psychedelic. His style of painting changed significantly in 2002 when, inspired by newspapers and history books, he started to produce large scale Figurative scenes. Many people were amazed by how he fused history and modernity. Examples of his latter works include Gedion (2002), Still (2002), and Trevelfast (2004).

In most of his recent works, Richter has borrowed heavily from both German history and Christianity; he uses their inspiration to depict contemporary scenes. The artist often succeeds in portraying both violence and beauty in his paintings. He has held a number of solo exhibitions, including those at the Galerie Jürgen Becker in Hamburg, Germany, in 1996, the Kunstmuseum Basel -Museum für Gegenwartskunst in Basel, Switzerland, in 2006, and the kestnergesellschaft in Hanover, Germany, in 2011. Richter has also participated in group exhibitions such as Deutscher Künstlerbund, Scharfer Blick, Bundeskunsthalle in Bonn, Germany, in 1995,The Triumph of Painting Part II at The Saatchi Gallery in London, UK, in 2005, and The Collection at the Essl Museum in Vienna, Austria, in 2008. Richter has also produced two stage designs for the Salzburg Festival: one for Lulu and another for Bluebeard's Castle.

The artist has received several awards, such as the Otto-Dix-Award in Gera in 1998, and the Kunstpreis Finkenwerder in Hamburg in 2009. Richter’s works are held by museums such as the Kunstmuseum in Bonn, the Museum of Modern Art in New York, and the Kunsthalle zu Kiel in Germany. Since 2001, he has been represented by David Zwirner in New York.

Daniel Richter lives and works in Berlin and Hamburg.