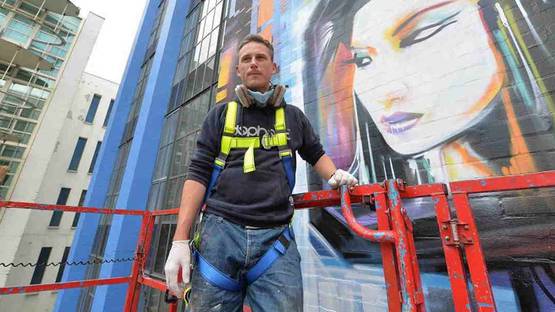 Dan Kitchener aka DANK is a British artist whose work has a gritty urban theme, taken from everyday life and the surroundings and environment he experiences daily.  In his work he uses a variety of mediums, spray paint, paint markers, stencils and paint for canvases. He also produces a lot of digital paintings and illustrations which again follow similar themes, lonely urban landscapes punctuated by flickering, faulty street lights, high rise flats rising from misty horizons over concrete grey skies.

Born in 1974 in Essex, DANK has diploma in GCSE art and earned his degree BA Hons in Art from Portsmouth University, fine art / illustration course.

Kitchener started painting streets when he was teenager, trying out tagging, copying the New York style graffiti he saw on TV and in books from the local library. Without much success, but with the tools available, Halfords car spray paint, he couldn't achieve the level of work he wanted to, and so he put graffiti on the back burner in favor of other techniques. But then, he picked up a can again with renewed enthusiasm and confidence and began his journey that last for over 10 years using the spray can to express himself on huge walls all over the world.

When DANK started doing graffiti again around 8,9 years back he painted alongside various local graffiti artists, not in a crew but more collaborating with people on walls and productions: “It was a very fulfilling and great time for me, experimenting and painting for the purest pleasure of paint on a wall, no commercial constraints or other motives other than a group of people spending a day together creating art on walls, great days....I sometimes paint in a crew called IM Crew with NOIR and FLEM although this is a loose crew.”

While making a piece DANK always has a sketch in mind or hand and then he allows himself the freedom to adapt and change the design to fit the spot. “That's the beauty of freehand spray paint, I use it as a pen, drawing on the wall, using the wall surface as a sketch book or concrete canvas, there’s no restrictions when free-handing my imagery, its easily adaptable unlike say stencils.”

He finds inspiration for his works all over the world… magazines, books, but mainly travelling. He loves travelling and has been lucky to have visited so many amazing places, Peru, Tokyo, Egypt, New York ... “Light and atmosphere are always inspiring and I seek out new lighting techniques and try to replicate the subtleties and the moods they can create, I feel that the use of light is the key to all my work.”

DANK’s work has been influenced also by Japanese culture. Japanese culture has always fascinated him since he was a child, with films such as ‘Blade Runner’ and the martial arts films, samurais and geishas that have always been stuck in his mind. “The vibrancy, color and energy of Japanese culture, alongside the design and rigid clean lines, are amazing, I love Japan!”

DANK has respect for so many artists, he particularly loves artists with good strong drawing backgrounds. For DANK art needs to challenge and progress, not replicate, duplicate and stagnate.

DANK worked for some major clients, including Sir Paul McCartney, Kylie, Calvin Harris, Il Divo, Carlsberg, MTV, ITV, Ministry Of Sound to name a few, exhibited artwork all over the world and sold to a growing body of avid collectors from Australia, Japan, America, and all over Europe.

His work has been evolved through the years radically. DANK likes to keep things fresh and diverse and constantly challenge himself with new techniques, mediums, and scales of work. He hates to do the same thing over and over and always try and push himself into unfamiliar and uncomfortable areas to see what he can create, “I love unknown, trying out new things is exciting and mastering a new technique or medium is addictive....diversity is a key to my work and work ethic.”