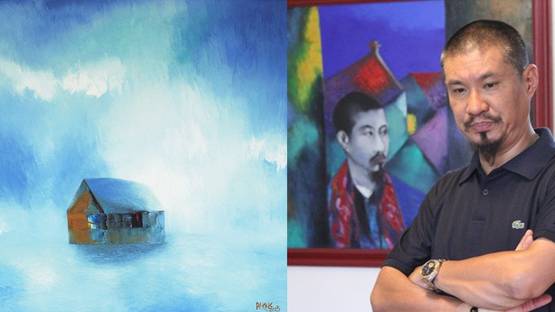 Dao Hai Phong is a Vietnamese painter born in 1965 in Hanoi, best known for his dreamy, melancholic landscape paintings, inspired by his travels and Vietnamese countryside and culture.

Phong is a son of the famous and award winning film artist Dao Duc, director of the first Vietnamese film Share a river, from 1959. In 1987, Phong graduated from the College of Drama and Cinematography, where he studied in the Art Film Design Department. Although he had painted in early childhood, from the age of six, it was only after graduation that Phong focused on developing his individual style. In 1992, he started designing for the Vietnam Film Studio, and soon attained the position of chief designer. In this period he began to paint prolifically and embarked on a career as an independent artist.

Highly regarded for his rendering of villages on the perimeter of Hanoi, his artistic journey has been one of memory and the preservation of a vanishing cultural geography of his youth. His use of glowing colors are reminiscent of sparkling gem stones and the rendering of textures on canvasses are translated into serene and lush vistas that emphasize the true nature of Vietnam. ‘I always see the beauty of the surroundings’, he states, and depict his saying in his adroit use of blue and other luminous, radiating colors. Most of his paintings are landscapes inspired by his travels when working on films. Although he was born and grew up in the city of Hanoi, he has been drawn to the beauty of the countryside.

In the early 90s, he changed his ideal about color and began incorporating the use of softer colors such as grey with the vivid blue. Phong admires other artists such as Le Thiet Cuong and Truong Tan, however believes that each artist is like a tree in a forest, and ‘each tree must have its own style.’ In Phong’s recent works, the change is visible in his use of colors, where the warm palette of yellows and reds took the main place over blues and grays.

Regarded as one of Vietnam’s most successful painters that emerged after Doi Moi, Dao Hai Phong has exhibited extensively since 1992 in his native Vietnam as well as abroad. He has taken part in several international exhibitions in Singapore, Japan, Hong Kong, United Kingdom, Italy, Laos, Switzerland, Thailand and the United States. He is a member of the Vietnam Fine Art Association.