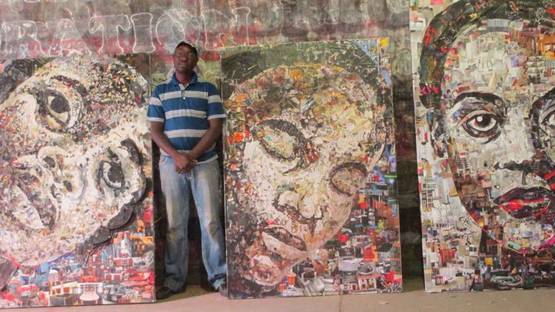 The most important gestures which shape the work of Dario Manjate are definitely collecting and layering. In order to construct his works the artist carefully selects, forms and installs the material. Therefore, these collaged compositions provide a feeling of Manjate’s focus on recycling in regards that each piece can be used for something and for several times. Besides the importance of the process, the images depict portraits of everyday people either in leisure or working which suggests Manjate’s interest in a social state of African society. Furthermore, the artist is questioning the concepts of human representation in regards to consumerist demands to which the physical beauty is standardized.

Dario Paulino Manjate is born in 1972, in Mozambique. From an early childhood, he was interested in painting and drawing. In 1993, Manjate relocated to Alexandra Township in South Africa and there he fully embraced his love in art and decided to pursue a career of a professional artist. Soon afterward, he met and worked with Mr. Steve Mavusu who was an art teacher at Thusong Youth Centre, important local institution. Under Mr. Mavusu’s guidance, Manjate perfected his artistic skills in a number of different mediums from oil over watercolor and acrylic to collage, the medium he is now known for today. In 1998, the artist assigned for Artists Proof Studio to polish his skills by studying the techniques of printmaking. In 2000's Manjate became a co-founder of D&J Art Studio and Gallery, together with the artist Jemmiro.

During the 90’s Manjate was involved in various community environmental projects such as Work To Win under which several art murals were realized in order to raise awareness in regards to the dangers of pollution and global warming. Such an engagement affected further development of his art and the artist decided to dedicate himself exclusively to the media of collage. That was in relation to Manjate’s attitudes towards consumerism and exploitation of natural resources.

The subtle critique of difficult position of women in contemporary society

The history of collage suggests the artist’s need to establish a break with traditional forms and in general a desire for experimentation. On the same trail, Manjate saw the media and as the time passed by he learned the limits to which he can push it. During the process, the paper is not torn apart, yet the pieces are cut in order to achieve better formal order. The artist is using recycled magazines mostly since that gloss accentuates the best the message he is eager to send. From the conceptual point of view, the works of Manjate are deeply rooted in social commentary so by physically cutting out and removing objects from their intended context he builds up the proﬁles and identities of his subjects.

The Means of Hard Work

Apparent interest in the matters of identity and body makes Manjate’s art practice recognized and established. In 1996 he was the winner of the Freedom of Expression Art Competition in Johannesburg and over the years his works were commissioned in several occasions by different organizations and institutions. The artist's exigency to employ matters of how we perceive ourselves in relation to others and the society in general stands as the prime goal of his agenda. The humanity is constructed from the very items it creates, so Manjate’s art reﬂects the concept of how appealing wealth is and yet how fragile its reliability is.

Featured image: Dario Manjate in front of his work - image courtesy of DJ Art Studio Gallery
All other images courtesy of the artist