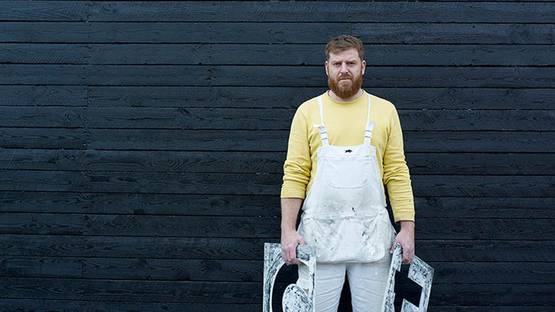 He works in a variety of media including photography and film, which he uses to explore the effects of time on the individual. He uses ‘sculpture, film and photography to produce work that harnesses the symbolic and emotional potential of objects, places and situations, producing works which have universal as well as personal resonances.

In 1995, Almond had his first solo exhibition in London, showing a single work, KN120, which consisted of a large ceiling fan installed under London's Westway and wired to his studio. A Real Time Piece (1995), was a live video link that showed his studio, empty but for an industrial flip-clock on the wall that amplified the passing of each minute. Amongst Almond’s other early works is a series of nameplates in cast aluminium, made in imitation of the plaques on British 125 inter-city trains. The filmSchwebebahn (1995) features the Sky Train, Wuppertal’s public transport system; over three days, Almond journeyed from the beginning of the line to its end and back again, filming inside and outside of the train in one long unedited take.

Since 1998, Almond has taken a series of photographs on nights with a full moon, using extended exposure times of fifteen minutes or longer. The Fullmoon series began as a way of navigating the places of traditional landscape painters, e.g. with a shot of Mount Saint Victoire in Provence that had been the subject of many of Cézanne's paintings, but has evolved over time to include other remote locations. For Six Months Later (1999), Almond repeatedly photographed at very precise times an identical location of his studio throughout a set period of time. Each shot features Almond’s desk and chair, a window, two fans and a wall mounted flip clock. Each and every photograph is identical with the only variations being the amount of light that permeates the space and the time displayed on the clock. Meantime (2000) comprised a shipping container the artist had transformed into a functioning digital clock and filmed as it traveled across the Atlantic.

The film installation Mine (2001) was shot in Karaganda, Kazakhstan. In this two-part work, one projection was shot in color and shows the miners in their locker room changing for work. The camera is stationary and the miners come and go. The second projection shows the view of the tunnel, in black and white, shot from the train that descends into the passages of the mine, in effect what is awaiting the miners when they are finished dressing for work. His series ‘Infinite Betweens’ consists of photographs that were taken in Tibet, where traditional prayer flags are hung in trails across the mountain ridges as a way to make offerings of thanks and prayers. The flags accumulate and become scattered over one of the highest and most exposed landscapes on earth. As with the Fullmoon photographs, Almond made use of moonlight and long exposures to shoot ‘Infinite Betweens’, preserving the movement of the flags and confronting the viewer with impossible perspectives, different focal points and a feeling of being within the picture. These photographs developed out of Almond’s film In the Between (2006), a 3-channel HD video with audio that examines the new high speed train that connects China with Tibet, a reinforcement of Chinese dominance. The title of these works refers to the Buddhist vision of relativity of all beings and things, the idea that we always occupy an ‘in-between’ state that is never ending and infinite. In Sometimes Still (2010), Almond follows a Tendai monk as he engages with the Buddhist process of Kaihōgyō, the feat of physical and mental endurance by which these monks attempt to reach a state of Buddhahood.

Notably, Almond was shortlisted for the Turner Prize in 2005, where he exhibited the four-screen video installation If I Had You (2003) about his grandmother – ‘a portrait of youthful reminiscence and the dignity of old age’ In 1996, Almond was awarded the Art & Innovation Prize by the Institute of Contemporary Art, London, followed by his solo exhibition at White Cube, London in 1997.

He lives in London.