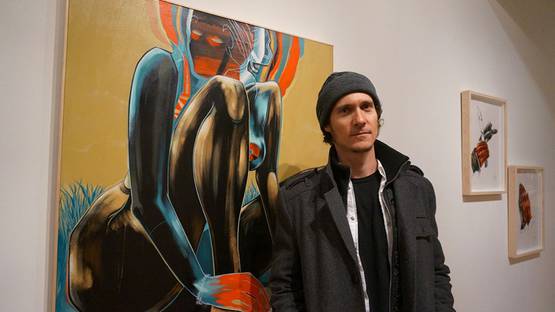 Dave Kinsey was born in Pittsburgh, Pennsylvania, in 1971 and attended the Art Institute of Pittsburgh and Atlanta before moving to California in 1994 to pursue a career as a designer and fine artist. His work attempts to capture the universal essence of the human condition mainly through a symbolic portrayal of contemporary life. Utilizing a range of mediums, he constructs multi-layered, textured environments that echo the complexities of our existence.

His fine art has been shown in galleries and museums worldwide and has been featured in local and international print and online publications from: The New York Times and Washington Post to Hypebeast and Widewalls.

Among many varied art and design accomplishments, Dave Kinsey was recently selected to participate in an international Absolut artist campaign leading to the commissioned design of a signature Absolut Vodka bottle, following his being chosen, in 2012, as the 33rd annual artist in the esteemed Kenwood Vineyards Artist Series.

In 1997 Kinsey founded the design studio BLK/MRKT, working with clients such as Nike, Apple and DC Shoes. In 2001, the company expanded to add a fine art gallery and BLK/MRKT Editions. BLK/MRKT is currently launching a new clothing and lifestyle brand, BLK/MRKT Original.