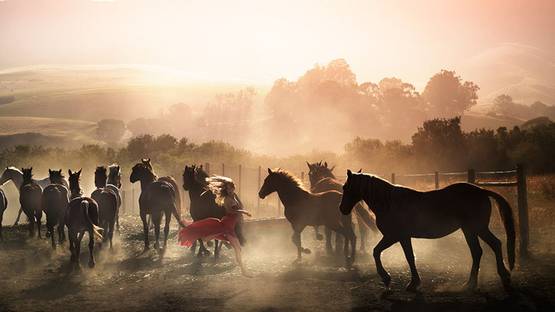 David Drebin is a Canadian photographer, known for his glamorous advertising and fashion photography, which invites the viewer into a metropolitan nightlife of champagne and luxury.

Drebin was born in 1970 in Toronto, Canada. After successfully completing the Parsons School of Design in New York City in 1996, David Drebin rapidly made a name for himself as an internationally renowned photographer creating images of movie stars, sports personalities and various entertainers and subsequently was commissioned for countless high profile advertising campaigns around the world. Among his exclusive circle of customers are businesses such as American Express, Davidoff, Mercedes, MTV, Nike, and Sony. His works are published in magazines such as Elle, GQ, Marie Claire, New York Times, Rolling Stone, Travel and Leisure, and Vanity Fair.

David Drebin captures the ephemeral quality of beauty and dignity through his documentarian style of photography. The attractive, and often lonesome woman, is often the focal point as she is placed amidst an unusual environment marked by a cinematic backdrop. The photographer underlines the staged nature of his scenes using harsh contrasts of light and color. Drebin's photographs are epic, dramatic and, above all, cinematic. In a unique and opulent way, Drebin stages attractive women against the gigantic backdrops of cities such as Hong Kong, New York, and Paris. The panorama of the big cities, which, due to their format, are a tribute to cinema, serve as gigantic settings. With their impressive skyscrapers, they provide the viewer with a nearly infinite surface for the imagination.

In a unique manner, David Drebin's work combines voyeuristic and psychological viewpoints. His intention is to liberate the viewer from the system of rules of everyday life and restore his faith, emotion, and humanity. The distinctive tension and depth in his pictures arise from the free combination of such differing topics as humor, sex and melancholy.

Drebin’s first comprehensive illustrated book, Love and Other Stories, was published in 2007, and signaled his transformation from commercial photographer to art photographer. Since 2004, his work has been featured in solo and group exhibitions across Europe and United States.

The photographer is currently based in New York.