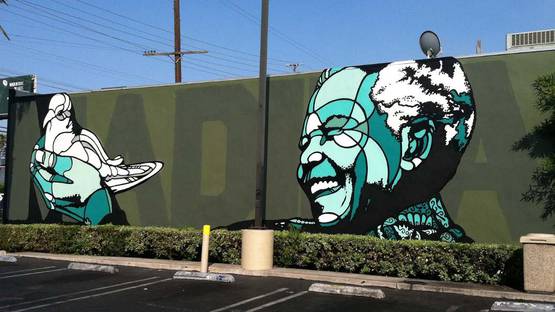 David P. Flores is an American artist, muralist and product designer. He graduated High School from Tulare Union High School in Tulare California, attended college in Santa Barbara and left with a degree in graphic design. After graduation Flores began his career as a commercial artist in the Skateboarding industry. Flores says his art was "an instant hit with the global urban art community especially in Japan", where he said his style was well respected and received. Flores is best known for his self-proclaimed "Stained Glass" and mosaic or segmented style. The impact of Flores' graphic style comes in its ability to allow the viewer to reinterpret a popular image they already have associations with. Flores' murals, acrylic paintings and sculptures have many iconic images, including images of late artists such as Andy Warhol, Salvador Dalí, Jean-Michel Basquiat and Robert Crumb. He participated in numerous collaborations.