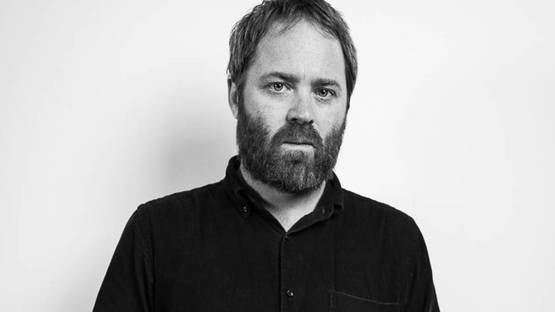 David Noonan is an Australian artist, whose work explores the inner workings of memory, connotation, and sentiment. His mixture of documents and textures resonate with a psychic force, producing fictional histories and imaginary landscapes that provoke, disquiet, and charm.

Born in Ballarat in the southern Australian state of Victoria in 1969, Noonan studied at university before completing a postgraduate course in Painting at the Victorian College of the Arts in Melbourne. He came to England and has been a permanent resident there since 2001.

David Noonan transforms black and white or sepia found imagery into striking collages and large-scale silk-screened tableaux on linen or films. He collects photographs, archival documents and magazines and books relating to utopian collectives in the 1960s and 70s, theatre and dance performances, or art education, and layers selected images with others of plants, animals and buildings, fusing histories where any sense of time and place is blurred or displaced. The multiple appropriations blend realism, mystery and myth.

Beginning each of his screen prints by making a collage, David Noonan brings together an eclectic array of found imagery – sourced from film stills, books, magazines, and archive photos, to create dramatic scenes that suggest surreal narratives. These collages are then photographed and turned into large-scale screen prints, a technique remarkable for its sumptuous finish that relates to both artistic authenticity and mass media. Printed in harsh contrast black and white, Noonan’s images encapsulate the romanticism of golden age cinema, and its associations to memory, fiction, and modern mythology. The fabrics he uses as the ground for the silk-screens are rough in texture and often patched or folded. Many contain printed patterns that are inspired by Japanese textiles. Noonan also produces paneled, figurative sculptures in which cut out silhouettes of performers act out grand gestures. Stylistically referencing Surrealism and experimental film, Noonan’s work poses as the aesthetic remnants of ‘lost masterpieces’, weaving his own extravagant fantasies into fabric of collective consciousness.

The pictures are inhabited by characters variously enacting moments of quiet introspection and scenes of extroverted performance – putting on makeup, dressing up, and acting-out sexually ambiguous identities. As the large pictures combine and overlay collected fragments into a single compositional space, Noonan’s paper collages almost clinically extract the fundamental components of his picture-making, laying bare the intuitive combination of abstract and figurative elements. Ghostly presences materialize from the grainy print, focus is blurred and the viewer is constantly forced to double-take as strange patterns emerge.

The one constant is that his artworks seem both mysteriously timeless and inscrutably modern. As well as working in paint and screen prints, he is also a film-maker, an installation artist and a set designer, using whichever medium best suits the work he is making at the time. His work has been displayed in numerous venues around the globe, in solo and group exhibitions.