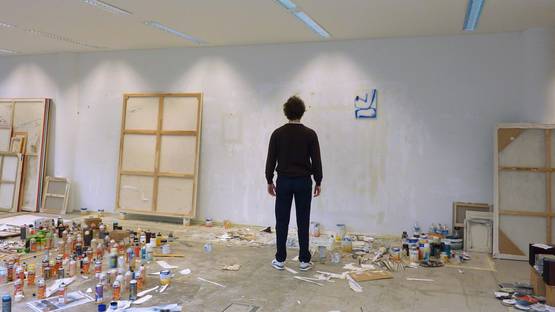 Creating minimalistic paintings, David Ostrowski uses primarily the white paint with the occasional scribbles of some other color, with the intention to make almost empty surfaces liberated from any outer influence. His works reach the astronomical sums at the auctions, despite the first impression which may be confusing. Abstract art is often a riddle and in the Ostrowski’s case, the maximum effect is achieved with minimal form and line engagement. The simplicity is reflected in the dense layer of the white paint and one or two colored lines that make the visual poetry.

Ostrowski graduated at Kunstakademie Dusseldorf under Albert Oehlen. His work has been shown in numerous solo and group exhibitions in both Europe and the USA. Growing up in the artistic family, it was the natural path to become an artist. The painting was his occupation since always, and it was easy for him to reach the limits of figurative painting very quickly. When there was anything left to say, the process of removal from the pictorial narrative towards the incomprehensible was natural and a part of his attempt to create something new, something still unknown.

For him, painting is like looking the meaning in the nonsense. He is not interested in understanding, Ostrowski is trying to make his work simple as more as possible. Using the inexpensive materials, he stopped to paint in oil because of its great possibilities. Spray brings the limitation of the expression and forced him to work quickly. There are no corrections and only counts the first shot. His creativity excludes the power to make decisions, but strong gesture and spontaneous style are allowing him to reveal unexpected and hidden possibilities.

The artist experiments with the mistakes

In his F series of works, Ostrowski explores the conception of the error in painting, by using in the process of the creation equally the left hand, though he is a right-handed. In that way, he makes paintings that present a surprise even to himself. The letter F indicates the German phrase Fehler Malerei which means painting error. Aiming to create a tension, he stopped to manipulate himself and lost control, believing in the content of the painting and the autonomy of the medium. He uses to draw sketches, but during the time, he realized that his expression has more freedom when he is able to make the mistakes.

Installations are also the spontaneous act

Having the high expectations, he considers that his pictures have to surprise him occasionally and they should never be stupid. Using the materials which he finds in the studio, like newspaper, stripes of wood or dirt, Ostrowski creates monumental pieces which represent the auto-portrait, depicting the vast emptiness, lack of motivation, but also the beauty, as the most important element. The second part of his work are the installations or including the paintings into the gallery space, which is also the spontaneous act. With the constant aspiration to undermine the composition, the artist experiments with speed and imperfection, successfully integrating the errors into his pictorial composition.

Featured image: Artist in his studio, 2014, photo courtesy of the artist
All images used for ilustrative purpose only