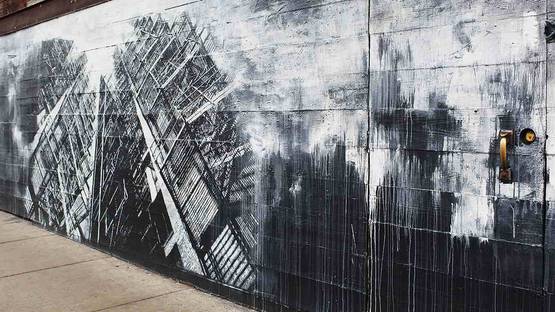 David Soukup is an American artist, famous for his amazing hand-cut stencil artworks that represent the urban surroundings, expressed through a balance between graphic design and photo-realism. A variety of techniques like spray paint, acrylics, graphite pencils, and paper define the interpretation of the city life. Special attention to the architecture, such as the remains of the old buildings and elements around it, is an attempt to preserve the memory on them. David’s work is the reflection of his everyday routine and a sign of his emotional relationship to the place he lives in.

The artist was born in 1985 in Chicago, USA. While pursuing a degree in illustration, David discovered stencil art with the help of two professors. His incredible almost obsessive attention to details, the precision, the determination, and the outstanding talent, were soon seen in the exploration of the new medium. The process itself includes his pictures, taken under different lighting and in specific contrast that are later manipulated and printed. The next step would be to cut them by hand and render them with multiple layers of spray paint. The final product is usually done with wood panels that were found on the street, on which layer and layer of paint, acrylic, latex, oil, plaster, concrete and other mixed elements are added to put it all together. David’s interpretation of metropolis alley’s, side streets, fire escapes and landscapes are just the manifestation of his fascination with the urban environment.

The process itself includes pictures, taken under different lighting and in specific contrast that are later manipulated and printed

The author’s latest pieces consisted of 24 large and small hand-cut stencils were displayed in 2017, as a part of the exhibition My Kind of Town at the Mirus Gallery in San Francisco. This three years long project gives the viewers the best possible insight into the secrets of Chicago and its architecture that gradually changes and goes down in history. The stencils themselves are the reflection of the city’s 20th-century charm, character, and facades that were once praised in Franck Sinatra’s famous song. This epoch will be replaced with modern and less appealing surroundings and David’s artwork will stay as a reminder of the past time. The inspiration comes from the textures, grit, iron bars, buildings, shadows, and the hidden beauty of artist’s home and everyday life experience.

Project gives the viewers the best possible insight about the secrets of Chicago, and its architecture

Soukup got international attention by winning The World’s Stencil’s Prize in 2013 in Sydney, Australia, and was named a finalist in 2014 and 2015. His paintings were used in filmography, interiors, television, and commercial productions. Besides Juxtapoz, Hi-fructose, and Artist-a-Day, they also featured in many local and on-line publications. David’s incredible artwork was exhibited in various galleries around the world.