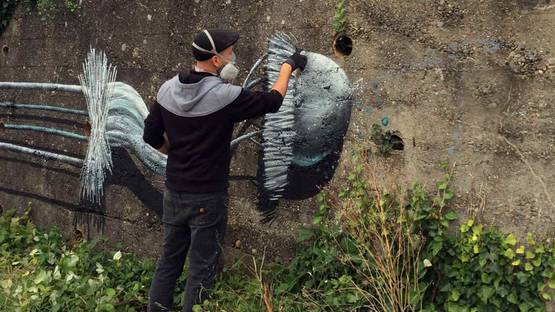 David Stegmann is a Swiss-German contemporary artist, born in 1982 in Freiburg, Germany. Stegmann's early work was heavily influenced by the Street and Urban art scene, adopting the moniker Dust in the year 2000.

In his work, Stegmann deals with what he describes as a new understanding of life and existence of man on Earth. His work consists of impulsive, fascinating images that are consistently developing throughout his oeuvre. His more abstract works look like random creations, expressive compositions reminiscent of natural phenomena. Stegmann's works have a spectacular presence which forces the viewer to pause and reflect on the scenes before him. David Stegmann paints on canvas, wood, paper, and glass, creates sculptures and designer toys and paints murals in public spaces. His new works with glass are witnesses of his irrepressible pioneering spirit and the consistent progression of his visual and design vocabulary.

David Stegmann's inspiration is derived mainly from nature. One's complete texture is not only characterized by size, but is also reflected in detail. Everything is connected and strives for cohesion. An all-encompassing symbiosis from which man arose when he claimed dominion over flora and fauna. His all-devouring pursuit of progress testifies to the fact that he continues to elude his responsibility for nature. This problem forms the basis of Dust's work, which directly contrasts man and the technology he has brought forth, with nature itself. That said, nature frankly no longer needs us and never has. It simply needs itself. Because of this, Stegmann avoids trying to prove his work with unique statements. The viewer should be encouraged to reflect on each work and reach his or her's own conclusions. Just as the smallest of cosmic entities change with closer observation, one can find details in his works that seem to be taken from nature and that become more apparent the closer one looks at them. The focus of Stegmann's work is the vision of a harmony between man and nature, abstract, traced back to the origin of people who, like animals in a consumer society, are robbed of their true identity and reduced to natural forms.