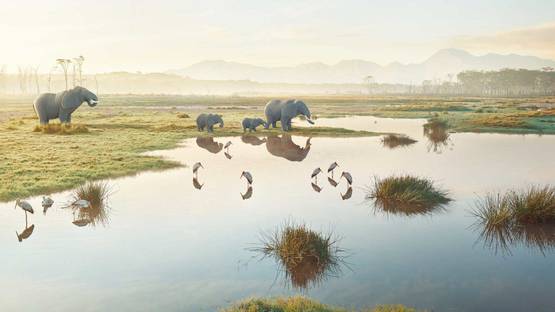 In 2012, Dean West and Nathan Sawaya released their first critically acclaimed project IN PIECES, a collaboration of Sawaya's LEGO brick sculptures and West's hyper-realistic photography. The project was a success, exhibiting in 14 countries in galleries and museums that include The Columbus Museum of Art (2012), Faneuil Hall Museum of Boston (2015), the Paris Expo Porte De Versailles (2015), Puls 5 Gallery in Zürich, and the Discovery Times Square Museum in New York City (2014), to name a few. In their new collaboration titled PERNICIEM (Latin for extinction), the duo turns their focus towards the environment and some of its most endangered species. The idea sounds simple enough – if we, humans, do not act collectively to conserve our planet and its species, then we're left with having to create an artificial reality. Sawaya's sculptures are built, photographed, and rendered into West's photography, emulating a form of augmented reality that references the increasing digitization of our world. The pixelated effect, coming from Lego bricks, forces the viewers to consider the past, present, and future of our landscape. A percentage of the proceeds will go to NGOs that are on the ground protecting and preserving the beauty and splendor of our world.