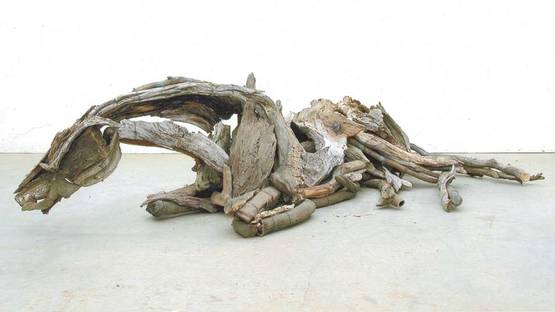 The love for animals seems to be a main driving force behind the work of Deborah Butterfield who’s astounding sculptures are dealing mainly with environmentalist subjects like vulnerability and fragility of nature. Her four decades-long career is based on the methodology of both sculpture in extended field and ready-made. Nevertheless, Butterfield takes a different kind of surge by appropriating natural forms in conjunction with a rather stiff concept. The way she constructs the bodies of the objects respectively animals reflects her deep concern for careless exploitation and ignorance of the animal world.

Deborah Kay Butterfield is born in 1949, in San Diego. She received her BA and MFA from the University of California, Davis and from the mid-1970s through the mid-1980s, she taught sculpture at the University of Wisconsin, Madison and at Montana State University, Bozeman. Over the course of years, she has developed quite a body of work which was shown on solo shows from 1976 onwards at notable institutions spanning from Seattle Art Museum, over Lowe Art Museum, to The Metropolitan Museum of Art, New York.

While still at the university, the artist was eager to experiment with the different form in order to avoid figural abstractions of women for which her tutor Manuel Neri was known. Instead, Deborah Butterfield chose to create self-portraits using images of horses, which appeared to be natural since the artist grew up with horses and developed an early interest in riding them. Gradually, the horses themselves became her primary theme. Among the first sculptures were the ones created using organic materials like mud, clay, and sticks. From 1977, after moving to a ranch in Montana, the artist started using scrap metal and found steel and extended her practice further.

The Process of Construction

Usually, Butterfield passes through immense preparations for the process. Most of the sculptures are made by assembling bronze casts of tree limbs arranged in the form of a horse. The artist collects branches continuously and then assembles them in order to build the form. Afterward, the model or the sketch is extensively documented in photos, the piece becomes disassembled with molds made of each branch and they are being subsequently cast in bronze. Using the photos, the bronze branches are welded into place and the whole thing is patinated. Due to brutality and harshness of the objects, the works of Deborah Butterfield is often compared with the opus of notable sculptress Louise Bourgeois.

Crafting horses out of scrap metal and cast bronze

The Horse As a Symbol in The Work of Deborah Butterfield

The very idea of depicting horse in completely different manner is based on the symbolical meaning those animals carry. More or less, they are often referred as free, gracious and proud, so horses embody the ideas of great hardiness, freedom, kindness and fragility. The decision to present them as ghosts and yet to accentuate their simple and energetic lines undermine both the artist’s self-reflection and the process of attitudes and feelings taking shape after a flood of experiences. The horses are usually depicted either standing or reclining, sometimes combining one of each into a single composition. The intricate casting process involving twenty people takes two to three months for a large horse.

The horse has been the metaphor of male domination

The Wider Social and Gender Context

The horse has always been a common subject of Western art and it was always a male prerogative. Deborah Butterfield belongs to the generation of young woman who back in 60’s fought for equality a Butterfield was one of them. She was one of two women in her master’s program and decided to deploy the subject which was not popular. No one was making art about horses any longer, and representation was supposed to come through a pop art style, according to common sentiment at the time. Regardless of conservative points of view, Butterfield experimented with new materials, participating in what the larger art world was doing at the time.

The Noble Practice of Deborah Butterfield

The artist built her astonishing opus on a deep respect, understanding, and love of horses. Interestingly, Butterfield often stresses that she was born on the day of the 75th Kentucky Derby when a horse named Ponder won. Nevertheless, the immense effort to produce and always differently contextualize one particular motif suggests great devotion not only to the animal but rather to the way how the form is being thought of. Despite the industrial roughness, her works are dramatic enough and reflect great refinement and evoke the horse not only physically but inside also on the inside, portraying the essence of the creature.

Deborah Butterfield lives and works between a farm in Bozeman, Montana and studio space in Hawaii.