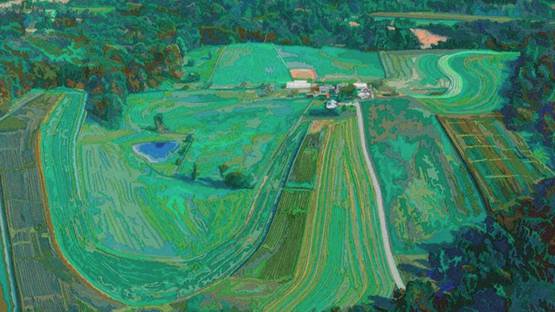 Deborah Claxton is an American artist, known for her images which only appear to look like oil paintings, but upon closer inspection, it can be noticed that they are made of small pieces of paper pierced glued to a board.
Claxton has been making art her whole life, but this practice started 20 years ago, around 1995, when she wanted to incorporate her love for color, drawing and sculpture into one unique kind of work. She wanted to work in a medium which would allow her to be in a direct contact with the materials she was using. Debora Claxton is fond of the idea that she can assemble images by using vivid, untouched colors, and she find this technique perfect for her practice.

The process of creation involves several stages. She first begins with outlining her subject, which is followed by drawing more details and deciding which color will “occupy” which section. The individual shapes from the design are subsequently transmitted to the accordingly colored papers. Before that, Deborah applies adhesive to the back of the paper. In that way, the shapes are ready to be applied to the board once she cuts them out. Finally, the pieces are combined and any mistake is righted.
The last stage is applying a number of layers of varnish to protect the image. Since the process is so detailed and complex, it can take a couple of months for Claxton to finish only one piece.

Claxton received the academic training at Maryland College of Art and Design and Corcoran School of Art in Washington DC. She also graduated from Syracuse University School of Art in the state of New York.
She also had numerous exhibitions, and has collaborated with many artists. Some of her more notable exhibitions include the 2008 Extreme Paper, and the 2013 exhibition titled Sur-real, both of which were organized by Woodward gallery. Her works are represented by them.

Deborah Claxton lives and works in Maryland, US.