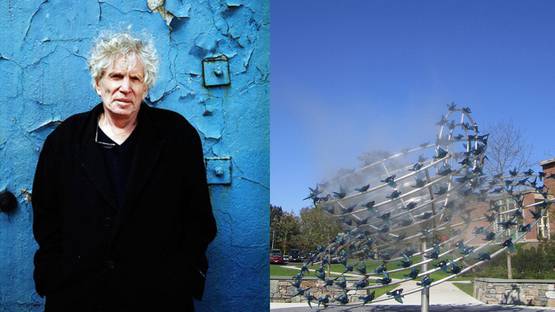 He was born in small town Electric City, Washington state, in 1938. There was not much art about, but his mother encouraged his early aptitude. His father was an engineer, which may explain Oppenheim's forays into sculpture with primitive engines and moving parts. After high school he attended the California College of the Arts in Oakland, then Stanford University. He moved to New York in 1966, later acquiring a house and a studio, plus several assistants, in Manhattan.

In 1969, documentation for Oppenheim’s land art project Annual Rings was shown at John Gibson Gallery, New York. In addition to gallery shows at Galerie Yvon Lambert, Paris, and Galerie Francoise Lambert, Milan, works were included in "When Attitude Becomes Form" in Berne and "Earth Art" at Cornell University, Ithaca - two of nineteen group shows the artist participated in that year.

Since the 1960s Oppenheim's works have been included regularly in international group exhibitions, at such venues as the Museum of Modern Art, Centre George Pompidou, the Metropolitan Museum of Art, the Venice Biennale and Documenta in Kassel. Solo exhibitions have included the Tate Gallery, London, the Musée d'Art Moderne de la Ville de Paris, and the Whitney Museum of American Art. Major retrospectives were presented at the Stedelijk Museum in Amsterdam, Museum Boijmans Van Beuningen in Rotterdam, Musée d'Art Contemporain in Montreal and P.S.1 in New York.

Dennis Oppenheim's practice employed all available methods: writing, action, performance, video, film, photography, and installation with and without sound or monologue. He used mechanical and industrial elements, fireworks, common objects and traditional materials, materials of the earth, his own or another's body. He created works for interior, exterior and public spaces.

Other public projects completed in 2010 are Journey Home for Grand Rapids, Garden of Evidence for Scottsdale, Arizona, Arriving Home for Chicago, Still Dancing for Toronto, Pathways to Everywhere for Calgary, Radiant Fountain for Houston, and Paintbrush Gateway for Las Vegas. His final work was Swarm, 2011, which is located on the campus of Norwalk Community College in Norwalk, CT.

Dennis Oppenheim lived and worked in New York City from 1968 and also in Springs, East Hampton, since 1985. Amy Plumb began as his assistant in 1977 and became his wife in 1998. He was good friends with his third wife, the sculptor Alice Aycock, and the artists Roger Welch, Bill Beckley and Vito Acconci. His first two children Erik and Kristin and granddaughter Erin live in Brooklyn, New York. His third child, Chandra, lives in Maine with her daughter Issa.

Oppenheim received a Guggenheim Foundation Fellowship in 1969, National Endowment for the Arts Fellowships in 1974 and 1982, an Excellence in Transportation award from the State of California in 2003, and a Lifetime Achievement Award at the Vancouver Sculpture Biennale in 2007.