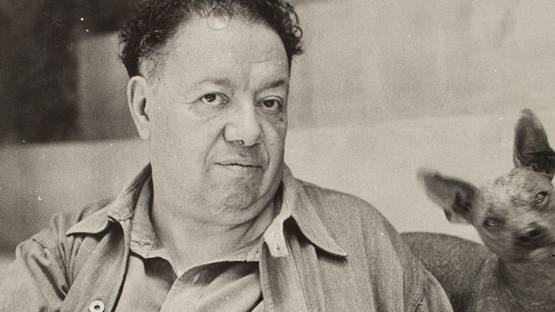 Diego Rivera was a notable Mexican artist, known for large murals and frescos, in which he proudly portrayed sceneries from Mexican culture and political and social prospects. His subjects cover the range from classical to visionary where the political note of his murals transcends the aesthetical impression. The murals reveal the incredible drive and vigor that moved Rivera and motivated him to passionately pursue his aspirations. Even in commissioned work, he couldn't resist but to honestly speak up about his beliefs and opinions. He openly propagated communism and socialism and believed in revolutionary character of art. In 2011 a major retrospective of his work was held at MOMA, New York, the previous one being in 1931. His ideological art, still relevant in present times, made him the leader of Mexican Muralist movement. Rivera's artwork reflects on capitalism and consumerism, mass production that swallows the rights of a common worker. The interest for his political engagement and movement striking art was revived at the beginning of 21st century, because of the global interest for his love life, the love story of Diego Rivera and Frida Kahlo.

Rivera was born in 1886 in Guanajuato, Mexico to a Judaist family that had to convert to Catholicism. For all his life Diego was an atheist, but he always felt a great injustice for his family conversion. He had a twin brother who died when they were two years old, and just a year after his brother's unfortunate death, Rivera started drawing. His first artwork was done on the walls of his home, but the walls were soon replaced with chalkboards that his parents installed throughout the whole house. When he was ten years old he started studying at the Academy of San Carlos in Mexico City. His extraordinary talent and ambition were awarded a scholarship to study in Europe. He went to Spain in 1907 but decided to move to Paris instead. Years in Paris determined the rest of his career, influenced his style, and gave him the opportunity to befriend some of the most prominent artists at the time. Few of them stayed in his close circle, like Amedeo Modigliani and his wife, writer Ilya Ehrenburg whose poems he often used in paintings and lithographs (ie Figura), painter Moïse Kisling and many others. At the time, the cubism started to expand in the art circles of Paris, and Rivera embraced the new style, moved by the paintings of Picasso and Braque. Aside from the cubism, he wanted to individualize his style and the paintings of Post-Impressionism movement got him to simplify his form and to encompass the beautiful vivid colors. He had a turbulent love life, many affairs, lovers, and wives. From the first marriage to Angelina Beloff he had a son, Diego (born in 1916, tragically passed away in 1918), and he had a daughter with Maria Vorobieff-Stebelska, named Marika (born in 1918). He was married to his second wife Guadalupe Marín, when he met Frida Kahlo. With his second wife, he had two daughters, Ruth, and Guadalupe. Frida Kahlo was still a student when she met Diego, and the couple married in 1929 when she was 22 and Rivera was 42. Twenty years of age difference, individually independent spirit spiced up with the heavy urge to create and flourish artistically, many fights and arguments caused by his flirtatious spirit and hot-boiled temper, made them one of the most famous and exciting art couples of the 20th century.

Rivera's style went through few transformations before he established himself as a muralist. The Mexican revolution in 1914 influenced his perception of art and its role in society. Simultaneously with the revolution in Mexico, he grew away from the cubism and post-impressionism and decided to never again be a part or even a sympathizer of the closed artistic circles that kept the art away from the public. He went on a road of discovery and by leaving France for Italy, he found what he was looking for in Rennesiance frescos. Frescos were the perfect medium for his idea to paint the socially important subject, open to a wide range of viewers, giving the audience a historical lesson packed up in the beautiful imagery. The complexity of the social changes he witnessed demanded a large canvas, so painting frescos and murals gave him freedom and space to portray all the important elements of the story he wanted to share. When he returned home to Mexico, Rivera was commissioned to paint several murals on the walls of public and governmental buildings, like the National Palace, Palace of Fine Arts and many others. He participated in the everyday political life of the governmental system, witnessed the change in the regime and new laws, all of which gave him the status of an important public figure. He painted scenes from the revolutionary protests, demonstrations, many scenes from the traditional Mexican folk culture, all mixed up in an anthropological and social depiction of the society. Day of the Dead elements were mixed with left-wing politics and egalitarianism symbols, producing an incredible allegorical scrutiny of the regime and the position of the modern man at the time. Although he was commissioned to paint by the Mexican government he didn't hesitate to openly scrutinize the authority and to state out his political preferences, in which he strongly criticized capitalism. His murals often included elements of Mexican, Indian and Aztec culture, flowers and skulls, beautiful sun soaked nature and landscapes.

The History of Mexico is one of the most famous murals Diego Rivera painted. It is located above the stairs in the National Palace in Mexico City, and it took the artist six years to complete it. He started painting the mural in 1929 and finished work in 1935. The subject of the mural is the history of Mexico shown in four sections, each one portraying the journey and struggle of a common Mexican man, fighting for independence and freedom against the Spanish and French occupation. Diego Rivera was hired by the Mexican government to paint Mexican past in a positive manner, to emphasize the greatness and bravery of the revolutionaries. The first part of the mural located on the north wall shows the traditional elements of Aztec folklore, painted around the big sun, which symbolized the center of the universe, the essence of being. There are many motifs of the traditional everyday Aztec culture, volcanoes, pyramids, temples, cornfields, workers, parents, craftsmen and artist. He included religious elements, worship of holy animals - snake and jaguar. The central part of the mural is located on the west wall and it shows the political fight against the oppression and dictatorship. This piece shows more drastic sceneries, the fight against religious conversions, hatred, poverty, and violence. Thier mission was to fight for freedom, against the Spanish dictator Porfirio Diaz. In the center of the mural is an eagle that symbolizes the Aztec religion, and a new era of Mexican history. The third part of the mural is located on the east and west sides of the main wall, depicting historical figures of Mexico. The last section, the fourth one, Rivera made under his vision of the future of the country. He saw Mexico under the socialist regime and under the Soviet flag. He painted his wife Frida Kahlo with her sister as the protagonists of a new regime, along with Karl Marx's Communist Manifesto and schools for new generations that will live prosper and never witness violence again.

Diego was asked to edit the Man at the Crossroads, but he rather saw it destroyed than changed

Man at Crossroad and the Return to Art in Mexico

The most controversial mural that Rivera ever produced was a later destroyed piece made for Nelson Rockefeller, entitled Man at Crossroad. He hired Rivera to paint a large mural for the new Rockefeller Center in New York. He wanted a modern mural and gave Rivera a topic - men looking for a better future, in a hopeful manner choosing the right path at the metaphorical crossroad of life. He chose to portray two ideologies - communism and capitalism placed right and left of the central part, in which men were depicted working on the machines. From the center, four propellers are rising to the corners of the mural, symbolizing the crossroad of life. There are images of scientific research, chemical reactions, telescopes, atoms with dividing cells. The controversial parts were not visions of future, but the obvious preference of the communist regime. Vladimir Lenin was depicted standing among the racially diverse group of people, uniting them by joining hands, while John D. Rockefeller Jr. was portrayed being surrounded by many women, drinking and smoking, expressing the vile character of capitalism even more stressed out with the scenes of police brutality and soldiers carrying weapons. For Rivera communism represented the preservation of natural goods, of peace and equal rights, while capitalism moved away from the equality and justice. The mural was never completely finished, Nelson Rockefeller ordered its destruction, but Rivera had photographs of the mural, so he recreated it under the name Man, Controller of the Universe at the Palace of Fine Arts in Mexico City.

Detroit works are one of the masterpieces of modern mural art

After the Rockefeller unfinished mural, Diego Rivera moved back to Mexico, taking some good memories of the time in the USA, as he painted murals for the Detroit Industry in 1932 and 1933, showing the modern Americal industrial workers. He liked this theme and believed in industrial revolution, so he depicted American men with sympathy. Time in the USA did him well, as he felt great pressure from the right wing movement back home. He also painted murals for the California School of Fine Arts and San Francisco Pacific Stock Exchange. The major point in his career was the exhibition at the Museum of Modern Art in New York, held in 1931. The Rockefeller incident lost him sympathies and appreciation of New York public, so he moved back to Mexico. His personality, which was often described as high-tempered, was not the main issue in his communication, it was his ideological work that was not approved. In the 1940's he was at a peak of his artistic career and political activism, which partly took its toll on his personal life when he and Frida divorced, but a later reunited. Kahlo and Rivera offered asylum to the Soviet politician, Leon Trotsky, leader of the Red Army and Marxist revolutionary. Rivera never stopped believing in social justice and strongly opposed any form of authority. He created murals, frescos and paintings for over fifty years. He was fascinated by the natural wealth of Mexican land, by traditional food and drinks, by beautiful women, science, and art.

Featured image: Diego Rivera with a Xoloitzcuintle Dog in the Blue House, Coyoacan (detail)
All images via Diegorivera.org