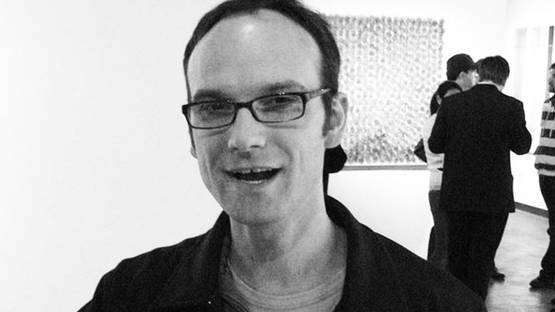 Johnson was born in Ohio in 1975, and holds a BFA from Ohio State University and an MFA from Claremont Graduate University.

Each work allows the viewer to focus on a unique interplay of overlapping, crisscrossing color and shapes, creating the illusion of movement and spatial relationships of varying depth. While the paintings’ crispness of line finds its origins in the digital sketches that Johnson works with, the completed works are truly a feast for the eyes. His extraordinary use of acrylic paint creates almost digital landscapes, enhanced by his ability to camouflage both brush and stroke.

Johnson’s distinctive technique solicits the viewer’s closer examination, although there is no trace of line to be found.  His large-scale canvases are visual experiences in precision, beauty, design, and most importantly, color. Johnson facilitates the “dripping” effect of the paint, by augmenting reality, meaning the overlap of color is not organic; rather the artist challenges the viewer’s interpretation of color, and enhances it in a constantly-evolving way. Inspired by his local surroundings, Johnson’s work represents one of the latest installments in the field of So-Cal abstraction that first developed in the mid-twentieth century.

Johnson’s paintings combine and explore dynamic opposites: expansiveness and compression, darkness and light. Johnson uses color to evoke the contemporary urban, digital and natural landscape of Southern California, and skews the vocabulary of abstraction into a hybrid techno-language. His compositions use broad open shapes with convex/concave edges against multi-planed bands, evoking atmospheric spatial shifts. The diagonal structures possibly allude to car windows or an opening retina, each exposing a radiant vastness. Johnson’s use of color is intuitive, though his Pop inspired vision comes from the commercial tangle of Southern California city structure. Whether observing the curvature of freeway interchanges or bright noon daylight, Johnson’s work is a clear balance of the harmonic and dissonant qualities in our environment.

His work has been exhibited extensively in the United States, including his 2012 and 2015 exhibitions at De Buck Gallery, Velocity and Chromatic Momentum. His work is included in many public and private collections, including the Pizzutti Collection (Columbus, OH) and the Andaz Hotel (West Hollywood, CA).