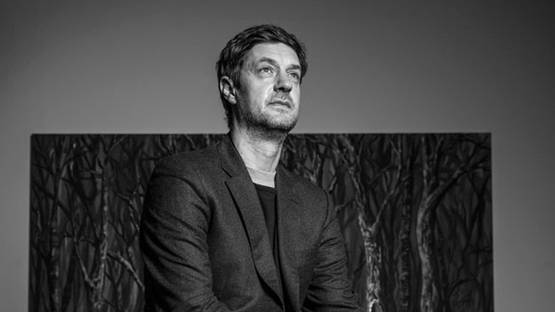 Djordje Ozbolt is a Serbian artist, currently based in London, known for historical and figurative elements in his paintings. The eclectic style seen in his work is a consequence of artist’s reckless nature and the fact that Djordje gets ideas from various, usually mutual incompatible sources. His creations represent a mix of traditional European genres like portraiture, landscape and still life, with African, Asian, Orthodox Christianity and stereotype culture. Traveling has a very important place in both personal and professional life of this painter. Without any plans and sketches, Ozbolt lets his paintings and imagination to lead him through the process of creation.

Djordje Ozbolt was born in Belgrade in 1967. From an early age, the artist got interested into art, either by reading books or by visiting the Museum of Contemporary Art in Belgrade. He used to draw a lot when he was young and still keeps a bunch of old works from Serbia and from London. As he is coming from a family of architects, he has decided to study architecture, out of laziness. In 1991, during the visit to his brother in London, he realized that he wants to study art. The beginning of the war in ex-Yugoslavia and the variety of styles that he saw in the artworks of the Young British Artists helped Djordje to make a life-changing decision. He studied at the Chelsea School of Art, and got his BA in Fine Art at the Slade School of Fine Art in London and MA in painting at the Royal Academy, in 2006.

As he is coming from a family of architects, he has decided to study architecture, out of laziness

Djordje’s paintings, sculptures, installations, and drawings are sometimes viewed as the picturesque satire of Western culture that goes deep into observer’s subconscious and reappears every now and then. The abstract narrative seen in some of his pieces is the ongoing momentum of sculptor’s imagination and inspiration, influenced by new cultures, education, and experience. Author’s opinion on the social and political situation is conveyed to his paintings in a humorous and sarcastic way, by adding Big Mac, lobster, dead birds, pig’s head, and other untypical things, with an aim to create Ozbolt’s personal aesthetic language. Exquisite technique and brushwork leave a sense of several art trends such as cubism, realism, surrealism, and primitive art. Experimental images consist of both dark and heavy colors, as well as vivid and bright shades.

Seeing different places, cultures and traditions have left a significant mark on Djordje, in the terms of his artistic works. Traveling and visiting numerous countries like India and Japan enriched his perception of art, and allowed him to incorporate a wide range of influences in his world of paint and acrylics. Ozbolt’s paintings have been displayed in solo and group exhibitions in many galleries and museums, such as the White Columns in New York, the Tate Britain, London in 2006, the Holburne Museum, Bath in 2016, and in 2012 the National Museum of Art, Osaka. In 2017 he had a solo exhibition at the Hauser & Wirth Gallery.

Featured image: Djordje Ozbolt – In New York, 2015 – Photo by Frank Sun, via interviewmagazine.com
All other images used for illustrative purposes only