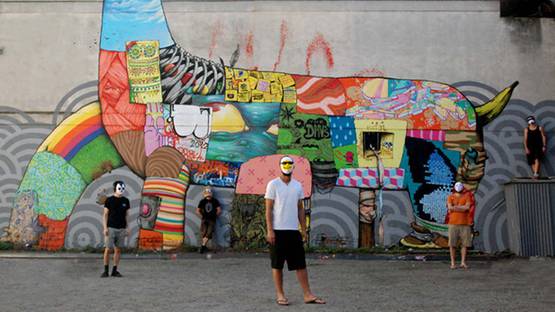 Thus, their artworks can span over tens of meters high and wide, depicting monstrous characters, madness and the imminent end of times. In the 2000s, Jaw from the south of France joined the collective with his crazy contorted characters and wild style letters. Gris1 came to strengthen the crew with his expertise in old school graffiti codes and vectorial madness. Brusk from Lyon, vandal master with "3D honour" followed shortly and added Dran’s touch of cynicism and childlike characters to the collective. Eventually in 2008 Sowat successfully managed to join the team with his throw-ups and calligraffiti… discreetly integrating Blo and his dislocated dolls to darken the whole scenery.

Da Mental Vaporz surprises by its creativity and combination of styles. Internationally known for its large scale spectacular murals, the DMV crew successfully manages to maintain the aesthetical unity of the group while strengthening their own individualities.