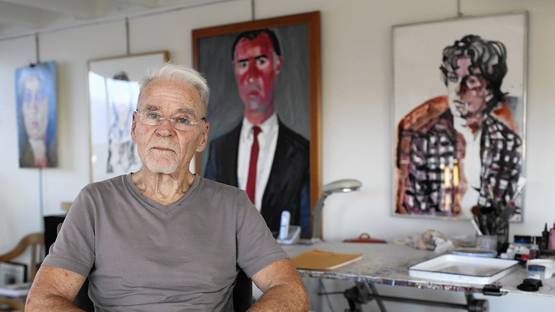 The splendid craft of drawing in the work of Don Bachardy takes on a completely different level. From the begging’s of his career, the artist was intrigued with the human body with the specific look on the human face. The body language or the facial expression can tell us much about the person, so Bachardy devotedly processed various psychological states throughout his several decades' long career. Often the depicted characters were musician, artists, but ordinary people as well. The way Barchardy subtly used color and the line made him rather authentic in the context of portrayal.

Don Bachardy was born in Los Angeles in 1934. He studied at the Chouinard Art Institute in Los Angeles and the Slade School of Art in London. In 1961 his first solo exhibition was held at the Redfern Gallery in London. Bachardy has since had solo exhibitions at galleries in Los Angeles, San Francisco, Seattle, Houston and New York. During the course of years, Bachardy’s works became part of various permanent collections spanning from the Metropolitan Museum of Art in New York to the and the National Portrait Gallery in London.

At the age of nineteen, in 1953, Bachardy, then UCLA student in languages and theater art, met Christopher Isherwood already acknowledged novelist, playwright, screenwriter, and autobiographer. Their relationship was more than emotional since both men were engaged in each other’s projects since a notable number of paperback editions of Isherwood's novels feature Bachardy's pencil portraits of the author. The two artists lived rather openly as the pair in times of the most homophobic decades in American history, the era of McCarthyism, which was marked by intolerance and non-acceptance, so they became celebrated in LGBTQ community as pioneers of the emancipation process. It was rather challenging to maintain the relationship since Bachardy was 30 years younger than Isherwood and was looked so boyishly as if was underage. Their friend renowned artist David Hockney painted a portrait of one of the 20th century's most vibrant pairings in 1968 and captured forever their love and comfort. They remained together until Isherwood's death in 1986, and even documentary film about their relationship titled Chris & Don: A Love Story was released in 2008.

The official artistic beginnings of Don Bachardy can be traced down to from the moment he met Isherwood, thought he was sketching profiles of movie stars from glossy magazines before they met. Isherwood encouraged his young partner’s apparent talents and introduced him to his circle of London friends – Richard Burton, Cecil Beaton, the director Anthony Page. Barchardy was prone to develop his portrayal style and over the years became known for the precise pencil and ink drawing. Rather simplified and linear, these drawings accentuated the eyes and mouth of each portrayed person. Despite being hooked on the genre, as the years passed by, Barchardy experimented with various body positions and with more brushier and expressive style. Interestingly, the artist always asks the person sitting for him to autograph and date the drawing or painting.

The master of depicting the person's inner state

Warren Beatty, Charles Laughton, Joan Rivers, Roddy McDowall, Montgomery Clift, Tilda Swinton, Angelina Jolie - these are just some of the names of celebrities who pose for Bachardy, yet they were depicted as anybody else meaning that he avoided celebrity cult in the favor of purified realism. The artist was interested in showing the person as it is without any additional context, although those portraits were reflecting the change of popular culture and art market since they were often commissioned. Despite the array of celebrity clients, Isherwood remained Bachardy's focal subject; in their diaries, there is an information about one sitting that resulted in seven different portraits.

The master of depicting the persons inner state

The Books Of Devotion

Throughout the years, Bachardy published several books in regards to his work. Perhaps the first one is Frankenstein: The True Story released in 1973 in collaboration with Isherwood. Sadly, the book Last Drawings of Christopher Isherwood from 1990 contains the dying and deceased Isherwood for the last time in his eyes. Yet, the one published in 2000 the book with his early works under the title Stars in My Eyes was a best-seller in Los Angles and brought him immense fame.

The book A Single Man by Christopher Isherwood was published in 1966 and it tells a story about the George, an English professor, who is unable to cope with the nature of his existence after the sudden death of his partner, Jim. In 2009 fashion designer Tom Ford decided to adapt the novel for a motion picture of smae title and contacted Bachardy for a little cameo part. Isherwood dedicated this book to Bachardy while their relation was in crisis, and ironically the artist has been living for years without his partner so the whole plot seems as if reflecting his own life.

The Established Career of Don Bachardy

Despite being in his ninth decade, Bachardy works on the regular basis, exhibiting and promoting his work. In 2011, Bachardy exhibited portraits made over the last 40 years depicting artists from Southern California, including Ed Ruscha, Peter Alexander, Larry Bell, etc. All paintings were purchased by a New York collector on the board of the Whitney Museum. Besides his own art, Don Bachardy is engaged with The Christopher Isherwood Foundation, which aims to preserve the creative legacy of Isherwood and himself. In 2004 the director Terry Sanders shoot a short documentary about the artist which captures the passionate and the prolific work of one of the great portrait artists of America.

Featured image: Artist Don Bachardy in his Santa Monica studio - image courtesy of LA Times
All images used are for illustrative purposes only