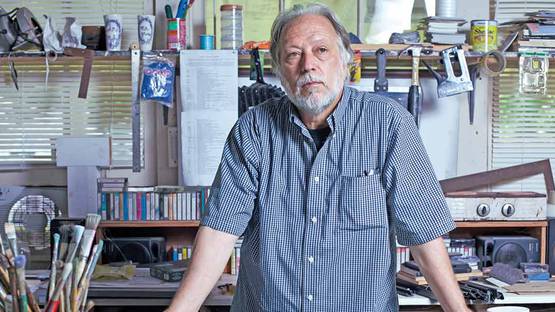 Don Kimes is an American artist known for his acrylic and ink paintings which are marked by bold splashes of color and unique textures.

In a catalogue essay for an exhibition of his work in Munich, Germany, he wrote about the relationship between nature and culture saying Italy affords the opportunity to think about culture, nature and the passage of time . . . In the end nature takes everything back. Seven years later a flood destroyed his home and studio. He subsequently wrote about the loss of nearly all of the works on paper he had ever done - 25 years’ worth - most of his photos, filing cabinets full of writing, and many other elements of a life’s work. It felt like the record of my existence had been erased. “The house and furnishings seemed incidental by comparison. Nature took everything back. My work is now based on those destroyed images. Through them color, form and structure combine with nature, time, memory, loss and rebirth. But I think that might be what my work was always about,” he stated.

He draws inspiration from the effects of nature and time. He has replicated the look of casualty and destruction within his work deliberately, influenced by the effects of time and the power of nature, loss and rebuilding. Kimes’s work reflects the process of discovering beauty in the midst of tragedy, the rebirth after the catastrophe. In his own words, “I am using the second part of my life to re-paint the first.”

Kimes' work has been included in more than 150 exhibitions internationally including Denise Bibro, Frederieke Taylor, Claudia Carr, Kouros, Stephan Gang and many more. He has received awards to be Artist in Residence at SACI in Florence, Italy; to live and work on the Pacific island of Kauai; to spend a year painting near Todi, Italy; a US Department of the Interior award to be artist in residence at Yellowstone; a grant from the Instituto Nacional de Bellas Artes to work in southern Mexico; Eisenhower Foundation and Chautauqua Institution support to be a United States Visual Arts representative to the Jurmala Cultural Exchange in the Soviet Union; and studio residency awards from the Millay Foundation; the Assensore di Cultura in Corciano, Italy; the Accademia di Belli Arti in Perugia, and others.

Kimes has been a Professor of Art at American University in Washington, DC since 1988 (serving as head of the studio art program for 18 of the past 27 years). As department chair for 11 years he led his program in a successful campaign raising more than 22 million dollars to design and build the 130,000 square foot Katzen Arts Center and museum. Concurrently, since 1986 he has also been Artistic Director in the Visual Arts at Chautauqua Institution - VACI - in New York State, working with his wife Lois Jubeck (who is the Managing Director). Together they built Chautauqua into one of the most respected summer art programs in America.