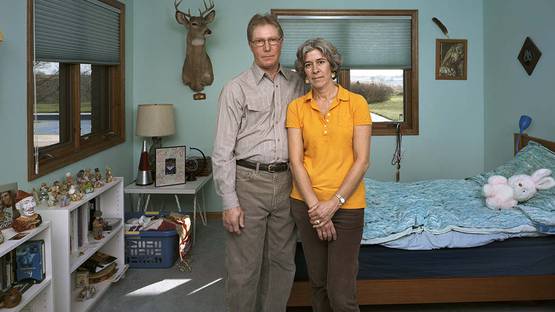 Every bird has its nest, the place where it always returns, raises her offspring, where it sleeps and lives. The humans are quite similar, and Dona Schwartz realizes that better than the most. Her work is inspired with life, as she explores the themes like culture and everyday life. In many of her photographs, her own family is in the focus. The artist has the ability to capture both what has happened in the past, and the expectations considering the future. The struggles that were and the uncertainty of what will be are clearly shown, as the time isn’t limited to just one moment. Dona is documenting entire lives with her photographs.

Time in the photographs isn't limited to just one moment

What do people feel when they think of a home and what is takes to turn a certain place into one? Is it a physical space, or are there some emotions necessary? What takes for one to become a strange place? The artist is seeking questions for these, and many other questions. As a person who moved with her family, the topics carry specific weight, but also give the particular emotional tone to her work. She knows it’s difficult to start over, but it isn’t impossible.

In the series Kitchen, she acknowledges the kitchen as a place in the house where we seek emotional and physical sustenance. We welcome there both our closest friends and most recent acquaintances. No matter how much things change in life, the kitchen stays the hub of the family life. For the Mothers and Others series, the lives of two mothers sharing nothing more than a name is documented. The photographs show the differences in the lives of the families, based on the economic situation. On the Nest series has two parts, one dealing with the people soon expecting to become parents and the changes and the expectations of parenthood. The second is exploring the reality of the nest being empty, as the children are leaving or there were no children at all. Schwartz is equally interested in the both scenarios, but the emotions and consequences of creating a new life never cease to amaze her.

Artist and an Educator

The artist has an extensive education which includes the BA with Magna Cum Laude from the University of Pennsylvania in 1977, the MA from the Annenberg School of Communications, the University of Pennsylvania in 1979, and a PhD in 1983, from the same institution. In addition to being an artist, she is also an educator. She currently works as an Associate Professor in the Department of Art, University of Calgary, Alberta, Canada. As a scholar, two academic publications stand out, photographic ethnographies titled Waucoma Twilight: Generations of the Farm (Smithsonian Institution Press, 1992) and Contesting the Super Bowl (Routledge, 1997). Her own work, a photographic monograph In the Kitchen was published in 2009 by Kehrer Verlag.

Schwartz earned a PhD from the University of Pennsylvania

The feeling of belonging somewhere is a powerful one. Inspiring, motivating, comforting, as well. The place we call home is a place where all the masks come off, where we are who we truly are. There we mature, grow, raise the children if we are fortunate enough to have them. Dona Schwartz knows the significance of the home, and she is using her talent and knowledge to explore it further and see what does it means for other people.

She is represented by Stephen Bulger Gallery in Toronto, Canada.