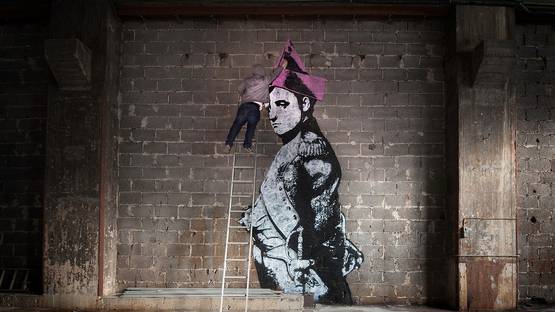 Dot Dot Dot is a pseudonym for a mysterious Norwegian stencil artist. Like Banksy and many stencil artists before him, he prefers to remain annonymous, this has as much to do with his long graffiti career as it does with the allure of anonymity.

What we do know is that he was born in Oslo, Norway and first started graffiti in 1997. He has operated under several pseudonyms, but when he successfully shifted to a more conceptual and figuratie style, settled on Dot Dot Dot.

He began focusing on stencil work in 2007 and in the last few years has become regarded as one of the country's leading street artists.

He has had a few notable features in National media, besides being featured in the book Street Art Norway Vol. 2, he also appeared on the NRK channel alongside other influential names in the business to talk about himself and the evolving world of street art. Outside of his own career, he has been pivotal in several projects that help like-minded artists similar to himself.

He is the founder of the firm All Rights Destroyed together with Peter Hillgaar which was started in 2012, as well as the ARD*POP-UP festival which invites national and international artists  to use Oslo's city walls as their canvas.