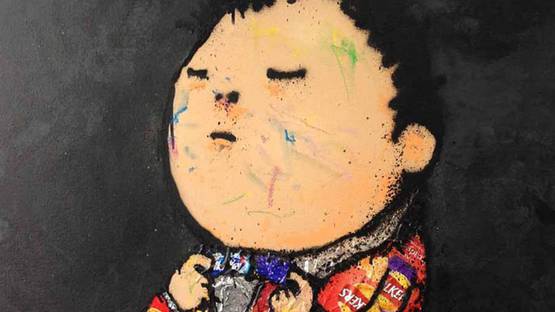 There are a large number of issues encompassing society as a whole in contemporary times. Though you may go out and experience a generally warm and welcoming public, the truth is that there are a lot of cultural and social issues on a smaller scale as well that are affecting the lives of most, hiding behind the faint smile. Exposing all of these through his artistic practice, Dran uses his witty form of irony and a dark sense of humor to present the subjects that some might turn a blind eye to. Revealing his point of view on the subject matter, the artist portrays a cartoon-like depiction while maintaining the heaviness of the message.

Widely known to both the street art world and the collectors, even titled as “the French Banksy” by some, Dran had started expressing himself artistically at a young age, copying images from the comics he would read. Moving his art to the street walls at the age of 13, he explored the movement and practiced his hand, forming a style that would largely differ from his peers during his attendance at the Fine Arts School in Toulouse. Perfecting his skill in various mediums which include illustration, graffiti, drawing, painting, stencil, silkscreen, and photography, he combines the lot in his practice to bring forth the many issues of society. Doing it in a whimsical, cartoonish way, his portrayals are always easy on the eye while expressing both major problems and individual issues many can relate to.

Dran brings forth the many issues of society in his practice

The Wrongs of Society

Easy to relate to, Dran’s inviting illustrations give out an innocent feeling whereas the narrative is anything but. Using dark humor and irony, he casts a critical eye on the contemporary society, criticizing the modern culture and the many flaws it brings to the table. He widely visits the themes of increase in failed marriages in the modern era, inability to connect between those that share the same bed, as well as some of the larger, encompassing issues including environmental destruction in favor of construction, over-consumption and waste. Another concern seen recurring in his art is the freedom of expression, oppression of creativity and art in general, especially in children who are naturally imaginative, yet suppressed and directed in their thinking. Depicting all these issues through child-like figures in his pieces, Dran admires and relates to their innocent escape through play and dreaming.

Echoing Through the Streets

Known as a member of Da Mental Vaporz group while standing formidably as an artist on his own, Dran has become a notable figure and a representative of French street art as his works echo throughout the streets of Toulouse and wider. Talking about issues that are seen on every continent, his art is accepted by the city public and gallery viewers alike, finding its way to both everyday passengers of the city and collectors of high caliber. Cartoonish and harshly real at the same time, his pieces are always a sight to be seen, provoking thought and inviting action towards the problems reaching us all.

Dran lives and works in Toulouse.