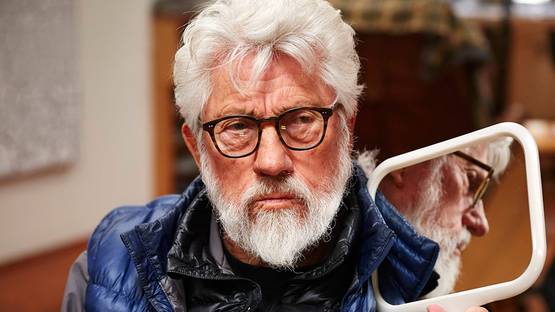 Ed Moses, an eminent American abstract painter was one of the central figures in the Los Angeles circle of artists for more than fifty years. His exhibitions at the Ferus Gallery in Los Angeles were among the key events at West Coast art scene from 1957 to 1966. Ed Moses belonged to the generation of artists called the cool school, whose philosophy was to perceive painting and drawing as a long-lasting process of personal development. Moses' pieces are somewhere in between semi-representational and abstract, they contain a lot of patterns and geometric shapes, which are partially inspired by the Native Indian tradition.

Moses' pieces are somewhere in between semi-representational and abstract

Moses was famous for his unusual life path, full of adventures and unexpected turns. He was originally from Long Beach, California and was in the navy as a medical technician throughout World War II. Even though he was a very bright young man, Moses had poor memory skills and couldn’t get accepted into any medical school in the United States. As a result, he couldn’t become a doctor, no matter how much he was interested in medicine. At the same time, drawing was his hobby since childhood, and he decided to give a chance to painting classes. His first teacher was the eccentric Pedro Miller who immediately recognized Moses’ talent. In 1949, he decided to leave Long Beach City College and try to transfer to UCLA. However, he wasn’t satisfied with UCLA art department so he left it and enrolled in the University of Oregon, where the same thing happened – he found the school overly traditional and conservative. Disappointed and mad, Moses left this school and became a crewmember on a sardine ship. In 1953, he decided to give a second chance to UCLA and re-enrolled there only to infuriate the faculty before obtaining his MFA, because he chose not to hold his graduate show at the school gallery. Even though Moses was prone to sudden decisions and acting on a whim, due to his immense talent, after his graduate show at the Ferus Gallery he became literally a star and worked hard for the next twenty years, which brought him a prestigious Guggenheim Fellowship in 1980.

Moses often talked about his intuitive relationship with artistic activities. He liked to consider himself a shaman who was leaving the evidence of his own existence for his tribe, which was his audience. Just like a shaman is materializing the unknown through his chanting, so was Moses trying to capture the unfathomable through his paintings. He was also a Buddhist and claimed that religion and philosophy had an important position in his lifestyle. In addition to religion, Navajo traditional crafts had been influential for Moses, especially the way Navaho people weave their blankets. Moses was impressed by their complicated patterns and incorporated the similar elaborate patterns in his art, especially drawings on vellum.

Navajo traditional crafts have been influential for Moses, especially the way Navaho people weave their blankets

Moses’s turbulent career had been dedicated to drawing, painting, printmaking, installation and even modern media such as stencils and spray paint. Roughly speaking, we can divide his entire body of work in two parts. The first part, from 1951 to 1953, included various architectural constructions. The second part which started in the mid-50s is already non-objective since at that time Moses started to focus on the surface and process, rather than the representation. In the 1970s, Moses began to experiment with process and material and decided to include resin in his painting, because it allowed him to transcend the traditional containment of the canvas. During the 1990s, his paintings became even more abstract but at the same time grid-based. In the late 1990s, restless and always innovative, Moses began to use new materials again, such as spray paints. In 1996, Moses' entire lifetime collection was presented at the retrospective exhibition at Museum of Contemporary Art in Los Angeles.

In the 60s and the 70d, Moses started to focus on the surface and process, rather than the representation

When asked about the process of creating his pieces, Moses replied: It's sort of like a dream, in a sense. It's not real. And I go to bed at night thinking about it, and I can't really understand it. Moses, who died on January January 17, 2018, saw the creation of art as a magical gift, an unusual yet deeply beautiful response to the life, people and the world itself.