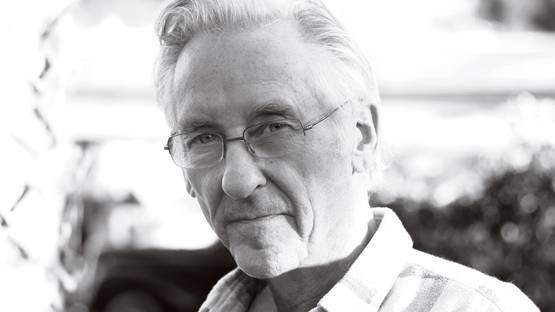 Ed Ruscha is an American visual artist strongly associated with the Pop Art movement. He is proficient in many media, including photography, drawing, painting, and the creation of numerous artist books. Generally speaking, his art documents the shifting symbols of American life in the last half century. His deadpan representations of Hollywood logos and icons, gas stations, and landscapes convert the imagery of popular culture into a profound language of cinematic and typographical codes. Ruscha is also famous for his witty and wry choice of words and phrases used in his word paintings.

Ed Ruscha was born 1937 in Omaha, Nebraska and he studied painting, photography, and graphic design at the California Institute of the Arts. He comes from a Roman Catholic family and it is known that Ruscha’s mother was supporting his son’s artistic talents and interests. As a young boy, Edward Ruscha was quite interested in cartoons and comics and this interest has persisted a throughout his adolescence. Just like in the case of Andy Warhol and Roy Lichtenstein, Ed Ruscha’s artistic skills were based on commercial art. In addition to his interest in cartoons, Ruscha was also passionate about graphic design and typography, which is evident in his works featuring various words and phrases carefully coordinated with the imagery and colors in the background. Ever since 1964, Ruscha has been exploring weird comic and satirical sayings related to the popular culture and life in LA.

Just like in the case of popular artists Andy Warhol and Roy Lichtenstein, Ed Ruscha’s artistic skills were based on commercial art

In the 1970s, Ruscha started experimenting with many non-traditional organic materials and even truly weird things, such as vinyl, blood, red wine, fruits and vegetables, chocolate syrup, tomato paste, coffee, caviar, various plants, eggs and grass stains. Using these unusual materials, he made his famous screenprints called News, Mews, Pews, Brews, Stews, Dues in the 70s. The names of these pieces allude to the segments of British culture – for example, News represents the tabloid-minded country, while Stews is related to the typical British dish. In the 70s, he also used to produce word paintings with edible products applied on silk and moire. For instance, his piece named A Blvd. Called Sunset from 1975 was made by applying blackberry juice on moiré. It is interesting to note that most of Ruscha’s saturated organic colors would become muted gray, beige or brown after drying up. This can be noticed in his series Insects from 1972, which includes six screen prints consists of six screen prints of interesting insect species. During the same year, in April 1972, Ruscha’s edible art has got a lot of public exposure after his photograph spelling the name of the magazine using pieces of food became the cover of ARTNews. His piece called Fruit Metrecal Hollywood is another great example the artist's application of weird materials. In this particular case, he used apricot and grape jam to paint on paper. When it comes to the topics of Ruscha’s works from the mid-1960s and 70s, their goal is to merge the representative and absurd approaches, creating a surreal atmosphere. His works from this era often show bouncing and floating objects, as well as the distortion of size and proportions. Ruscha’s style from this era is strongly resembling surrealism, which has an important place in the artist’s career. A common recurring motif in Ruscha's work is a depiction of a pencil, which is broken, melted, transformed, somewhat like the objects in famous paintings of Salvador Dali.

In the 1970s, Ruscha started experimenting with many non-traditional organic materials and tools

During his years in Los Angeles, Ruscha became quite obsessed with Hollywood and everything it represented. He even said that Hollywood is a verb. It played a very important role in his art and it was his favorite muse. In 1973, he even photographed the entire Hollywood Boulevard. His love for Hollywood grew even stronger after he started getting engaged in the movie industry – for example, his painting The End from 1991 looks exactly like the final shot in the old black and white movies. Also, the proportions of his prints from the Hollywood series were made to mimic the Cinemascope screen. In order to create the word Hollywood in his pieces, Ruscha had to transpose the letters from their usual location in Santa Monica Mountains to the top the hill.

During his years in Los Angeles, Ruscha became quite obsessed with Hollywood and everything related to its culture and style - it was his muse

Ruscha's word paintings represent the result of his long-term interest in words and typography. The very first of Ruscha's word paintings oil paintings on paper, created in Paris in 1961. Later on, from 1966 to 1969, Ruscha started using a new style, called liquid word paintings. His pieces such as Adios from 1967 and Desire from 1969 were written as if using a spilled liquid over a simple flat surface. He also used gunpowder and graphite drawings from 1967 to 1970. His artworks from this short interval feature words represented in a trompe l’oeil technique, which means they look like as if they were made of curling paper. In the 1970s, Ruscha became one of the pioneers of inserting phrases into visual arts, together with Barbara Kruger and Jenny Holzer. Later on, this particular style became of the main directions in the post-Pop Art generation. In the mid-1970s, Ruscha made an innovative series of drawings in pastel using witty phrases, while in the early 1980s he made a splendid series of paintings of words written over sunsets or late night skies. In the 90s, Ruscha has changed his style again and started producing photorealist images of mountains. He also changed his approach to typography and began to use the all-caps typeface that he invented and named Boy Scout Utility Modern. This simple font is very different from the ones he used to use in his old works. Also, it is interesting to note that in the mid-80s, Ruscha was using black or white censor strips in his works, in order to suggest where the missing words should have been positioned. The similar blank space is also used in his Silhouette and Cityscapes series.

In the 90s, Ruscha has changed his style again and started producing photorealist images of mountains

Photography was a really important medium during the entire Ruscha’s career. He started taking pictures back in 1961 when he traveled to Europe with his family. His photo imagery is quite simple and straightforward, even deadpan at times and his subjects often lack some basic aesthetic values. His series called Products represents boxes of raisins and various kitchen cleaning items, such as detergents. Ruscha’s photos rarely portray humans, they revolve around formal still lifes and simple environments. His photo editions are also rooted in the conceptual approach, which becomes evident especially in his art books. One of his most famous photographic books is called Every Building on Sunset Strip and it is based on the negatives of six images from his book, which we reworked in a certain way. The artist was painted on the negatives, which resulted in photographs which look like faded black-and-white film. His another photo series called Tropical Fish, from 1974, is somewhat different since in this case the artist has used the unaltered photographs directly in his work. During the 1970s, in addition to his photographic pieces, Ruscha has also dedicated himself to filmmaking and he made a number of short films, such as Premium from 1971 and Miracle from 1975. Premium was filmed thanks to the help of Guggenheim Foundation Fellowship. Ruscha based the scenario of this short movie on his photo book from 1969 and transformed it into a film which features Larry Bell and Leon Bing. When it comes to Miracle, it is also based on one of the artist’s previous pieces, a painting of the same name, describing an unusual day in the life of an auto mechanic. The main actors in this movie are Jim Ganzer and Michelle Phillips. In 1984, he even appeared in a movie himself. In Choose Me, directed by Alan Rudolph, he accepted a small role. More recently, in 2010, Ruscha appeared in another movie, called Sleepwalkers. Besides regular movies, Ruscha’s presence is notable in a couple of documentaries. He was featured in Michael Blackwood's American Art in the Sixties and also L.A. Suggested by the Art of Edward Ruscha, which is 1981 documentary made by Gary Conklin. A lot of interviews with Ruscha are included in the following documentaries:  The Decisive Moments from 2002, The Cool School and Iconoclasts from 2008 and How to Make a Book with Steidl, from 2010.

Ed Ruscha has a very long history of exhibitions since he’s an active exhibitor starting from the 60s. One of the first important public commissions he made is a monumental mural at the Museum of Contemporary Art in San Diego in 1966 and a large 360-degree panel made for the Public Library in Denver. Later on, in 1998, Ruscha made another giant public project, which was a thirty-foot high painting called Picture Without Words, for the Harold M. Williams Auditorium. In 2014, he made his first public commission in New York City, called Honey, I Twisted Through More Damn Traffic Today, which is again a large mural. Ruscha has also participated in the celebration of the 75th anniversary of San Francisco Museum of Modern Art, by creating a limited-edition of T-shirts. Ruscha has also numerous private commissioned works, such as Public Stoning from 2007, Boy Meets Girl from 1987 and Stella from 2001.

In 1970, Ruscha took part in the Venice Biennale and he had his own printmaking workshop these. He designed the Chocolate Room, an innovative visual and sensory 360-degree experience, where the visitors were completely engulfed by the seductive world of chocolate. Because of this, the entire pavilion in Venice smelled like a chocolate. Ruscha has been the subject of numerous museum retrospectives, the first one being held in 1983 at San Francisco Museum of Modern Art. J. Paul Getty Museum in Los Angeles organized another important retrospective of his work in 1998 and the Whitney Museum of American Art has done the same in 2004. In 2006, even European museums started organizing retrospectives of Ruscha’s splendid work, such as the Jeu de Paume in Paris, the Kunsthaus Zurich, and the Museum Ludwig in Cologne.

The Legacy of Ed Ruscha

J. Paul Getty Museum and the Getty Research Institute have acquired many of Ruscha’s photographs and also his Streets of Los Angeles archive. This archive consists of many negatives, photo contact sheets, and similar documents. Some of these items will become the artist’s gift to Getty. Another institution interested in Ruscha’s work is Harry Ransom Center. In 2013, this center acquired the artist’s archive which consists of numberless journals, sketches, and notes, as well as the materials for the artist's book called On The Road. Harry Ranson Center also acquired his materials related to the short films Miracle and Premium as well as his legendary portfolios. A large portion of these works is donated to the archive of the Ransom Center by the artist.

J. Paul Getty Museum and the Getty Research Institute have acquired many of Ruscha’s works

I could see I was just born for the job, born to watch paint dry, Ruscha says about his natural predilection for visual arts. Even though his images are based in the vernacular of a closely observed American society, they are elegant in a laconic way. They don’t speak only about the American lifestyle and culture, but also about more complex, universal and widespread issues related to the appearance, meaning and function of the world we’re living in, which is a transient, ever-changing place, and each of its different phases has a certain artistic charm to it.

Featured image: Ed Ruscha photographed at his Culver City studio - image via artnews.com
All other images copyright of the artist.