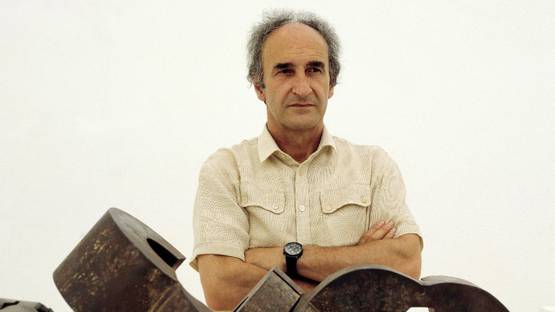 The oeuvre of Eduardo Chillida represents one of the finest examples of thinking the media differently in regards to its conventions. Namely, it is hard to describe his works as mere sculptures, rather they can be classified as site specifics or spatial interventions. The way Chillida articulates the mass and volume, the material and the very space, reflects the immense focus on the production of meaning. Although his works are indeed abstract, they are permeated with conceptual questions and metaphysical concerns.

From Football Player To An Artist

Eduardo Chillida was born in 1924, in San Sebastián. He was raised in an influential family, with his father being a major and mother a soprano. As a young boy, Chillida practiced football for the local Real Sociedad team, but his knee was severely injured and that caused the end of the promising football career. From 1942 to 1946 he studied architecture at the University of Madrid, but in 1947 decided to abandoned architecture for art. Shortly after, Chillida moved to Paris, where he set up his first studio. In 1950 Chillida married Pilar Belzunce and later returned to the San Sebastián area, first to the nearby village and in 1959 to the city of his birth, where he remained until the end of his life.

His sculptures are carefully thought in regards to the open space

The Choice of Material

In the begging, the artist worked with clay and plaster, but soon he started focusing on using steel and granite, the materials with which he could deal with the empty space, the vacuum and the horizon. Upon returning to the Basque Country in 1951, Eduardo Chillida soon abandoned the plaster and transferred to working with forged iron. The artist opened his studio and started producing the works in collaboration with the local blacksmith. For some of the works, Chillida used wood as a base and in 1965 he began making sculpture in alabaster. Rather than turning over a maquette of a sculpture to fabricators, the artist worked closely with the men in the workshops.

Eduardo Chillida was fascinated with the characteristics of iron

The Matter of Form

Initially, Chillida was concentrated on the human form, especially torsos and busts, while his later works tended to be more massive and more abstract. After he rediscovered iron the artist produced his first Abstract style sculpture which was called Ilarik. That work was a primitive and austere piece of sculpture but it incorporated some of Chillida's favorite elements: space, emptiness, scale, and matter. Actually, it represents the introduction in a further development of almost brutal and industrialized aesthetics. As the time passed by his works have become more and more massive and monumental, suggesting movement and tension.

Specific approach to mass and volume

Already in 1954, Chillida produced the four doors for the basilica of Arantzazu, and the following year, he carved a stone monument to the discoverer of penicillin, Sir Alexander Fleming, for a park in San Sebastián. Since he became established author, by the early 1970s several of his steel sculptures had been installed in front of the Unesco headquarters in Paris, the ThyssenKrupp building in Düsseldorf, and in a courtyard at the World Bank offices in Washington. Interestingly, for one of the most astonishing works of his titled Monument of Tolerance, an artificial cave was dug into the mountain.

Eduardo Chillida was consistently driven by the quality of space, density, and rhythm

Much of Chillida’s work is inspired by his Basque upbringing, and many of his sculptures have titles in the Euskera Basque language. Nevertheless, in the early 1960s, the artist engaged in a dialog with the German philosopher Martin Heidegger, which had a huge impact on his further work. They were discussing the concept of the space. The philosopher proposed that the sculpture shows us how we belong to the world, the world in the midst of a technological process of uprooting and homelessness and how we can still find room to dwell therein.

The Reception of Eduardo Chillida

Despite the fact that Chillida received international attention, his work went unnoticed in Spain for some time. Simultaneously with sculpture, he has realized quite a number of etchings, lithographs, and woodcuts since 1959. The artist had solo shows and retrospectives all around the globe and participated at the Documenta exhibition in Kassel three times. His works are in major museums, and in 2000 Chillida opened his own museum in Hernani, fulfilling a lifelong dream and passed away at the age of 78. The notable sculpture was modest, and tended to reject the label of abstract", preferring being called a realist sculptor. The impressive body of work, as well as deep understanding of matter and form, made Eduardo Chillida one of the most important Spanish sculptors of the 20th century.

Eduardo Chillida passed away in 2002, at his home near San Sebastián.

Featured image: Portrait of Eduardo Chillida - image courtesy of Pinterest
All other images are used for illustrative purposes only