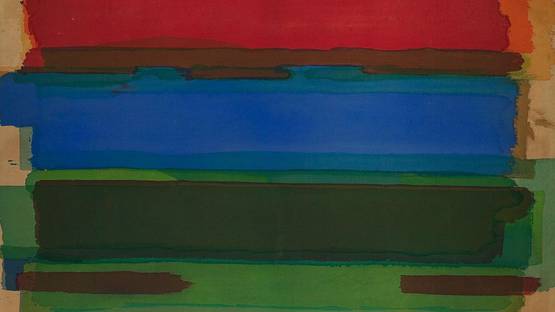 An American abstract artist, Edwin Ruda consistently probed the connections between minimalism and the geometric and lyrical modes of abstraction.

Born in New York City in 1922, Ruda graduated from Cornell University in 1947, having interrupted his studies to enlist in the navy during World War II.  In 1949, he received a Master of Arts from Columbia University and spent the following decade studying in Mexico City, teaching at the University of Texas, and completing a Master of Fine Arts at University of Illinois, Urbana-Champaign. He returned to New York in the early 1960s, when he began to create arrangements with strong geometric and optical properties.

Unafraid to step beyond stylistic boundaries, Ruda began creating an elegant, radiant body of work characterized by pure and translucent bands of colors that are rarely part of minimalist statements. These large, complex painterly abstractions, known as Band paintings, served as a missing link between minimal art and lyric abstraction. During the mid-1960s, he became a leading figure in the Park Place Group, that included artists such as Mark di Suvero, Forrest Myers, and Leo Valledor.