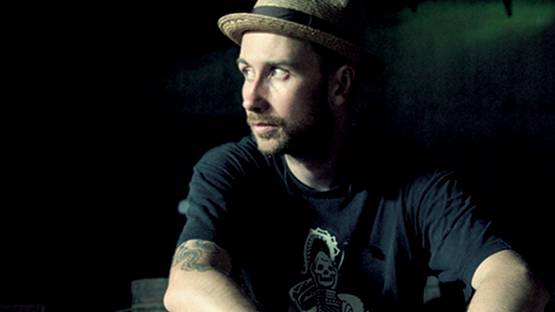 Eelus (b.1979) is a mysterious stencil artist. His work is often both beautiful and haunting, humorous and sinister, a daring mixture of light and dark. After moving to London 10 years ago, Eelus was almost instantly snatched up by master printmakers Pictures On Walls.

Eelus started his commercial art career at the tender age of 9 when he started selling hand drawn pictures of the ‘Teenage Mutant Ninja Turtles’ for 5p plus VAT in the torturous playground of a Wigan primary school.

Eelus graduated to drawing various monsters and dinosaurs describing his college portfolio as “pretty similar to what you’d find under a serial killers bed”. After realizing his college tutors were wrong and there could be a chance he could make a living from painting pictures, he threw the towel in on his design career and hasn’t looked back since.
Now working from a spider infested shed in his garden in Hastings Eelus has been developing his style more on canvas than on walls for a while now.

However Eelus's temporary absence from the streets hasn’t reflected his absence from the scene and in the last couple of years he’s taken part in a number of highly successful group shows in London, Bristol, Norway, Los Angeles and Atlanta as well as being asked to paint in Japan and New York. He’s produced work for leading London galleries, painted a canvas for Green Day and has worked and exhibited alongside some of the world’s best contemporary masters.

Eelus is a master of the modern, graffiti-led art world. He combines his background in design and illustration with images of sci-fi, B-movies, housing estates, girls and the bizarre.

Eelus’s early works like ‘Chewbarber’ and ‘Shat At’ were heavily influenced by the movie Star Wars. He has also collaborated with 75 of the hottest underground painters, artists and designers on the Vader Project to celebrate the 30th anniversary of Star Wars.

After moving to London fromEelus home town of Wigan he was inspired by the graffiti art he saw on the streets to take the work in his sketchbooks and display it to a wider audience. In 2006 he gave up his day job and is now working full time as a graphic artist.