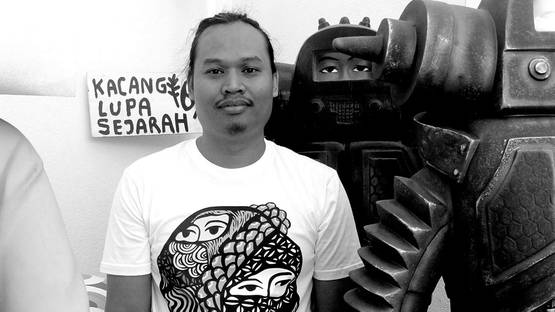 Eko Nugroho is one of the most acclaimed members of the young generation of Indonesian contemporary artists. Nugroho's work represents the daily life of Indonesian society, which is on one hand strongly hierarchical and Muslim-influenced and on the other hand influenced by globalization and the western value system.

Nugroho was born in 1977 and grew up in Java and resides in one of the island’s major art centres, Yogyakarta. His works are grounded in both local traditions and global popular culture. In particular, he has cited the influence of traditional batik and embroidery styles. There is of course also a powerful inspiration from contemporary street art, graffiti and comics. He is part of the generation that came to maturity during the period of upheaval and reform that occurred in the wake of the 1997 Asian financial crisis, the subsequent fall of the Suharto regime and the transition to democracy in Indonesia. He is deeply engaged with the culture of his time and is committed to making socio-political commentary in his work.  In 2000, Nugroho founded Daging Tumbuh, a collaborative sine that invites participation from non-artists. In addition to drawings and painting, he works in a variety of other media, including murals, sculpture, animation, and tapestry.

In his paintings this contrast is visualized by showing fantasy beings comprised of human limbs and machine elements with faces mostly hidden behind masks or helmets. By juxtaposing these images with humorous but also critical texts and sayings, Nugroho tries to entice especially the young Indonesian generation to deal with political issues. He develops his skills in as many mediums as he can, from painting to drawing and video to more traditional hand craft techniques such as hook rugging. He captures the noise and the frenzy of the street, the eye-contact, identity, attitudes. He translates this flow in his drawings and patterns which invade the space.

Eko Nugroho participated at the 55th International Art Exhibition of the Venice Biennale in 2013 and at the Lyon Biennal, Lyon, France in 2009. He held solo exhibitions at the Singapore Tyler Print Institure, Singapore (2013), at the Musée d’Art Moderne de la Ville de Paris, France (2012), at the Peking Fine Art, Beijing, China (2009), at the Kiasma Museum of Contemporary Art, Helsinki, Finland (2008) and at Artoteek, The Hague, The Netherlands (2005).