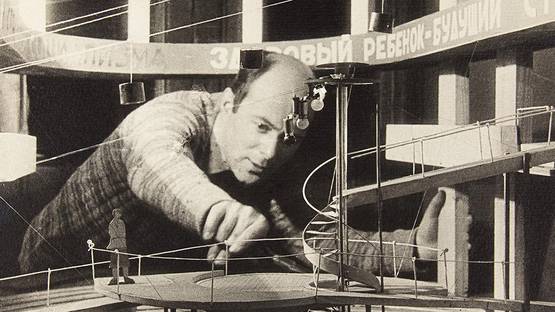 El Lissitzky was a Russian avant-garde artist and polemicist who utilized art in order to initiate various social and political changes. Even though his work was often abstract, El Lissitzky’s was addressing the political situation in Russia and the nascent Soviet Union. Following his mentor Kazimir Malevich in the movement of Suprematism, Lissitzky used colors and simple geometric shapes to make powerful political statements. He also challenged many conventions of traditional art by mixing architecture with abstract, two-dimensional imagery. Lissitzky’s innovative and versatile work included many media - graphic design, typography, publishing photography, book design, and architecture. Because of such approach, the artist made a strong impact on modern art, especially De Stijl and Bauhaus creators.

El Lissitzky was born in a small Jewish community in the western part of the former Russian Empire. He was incredibly good at drawing since his early teenage years and he was spotted by a local Jewish artist who became his mentor. By the age of fifteen, Lissizky has already become an art teacher himself his teaching career, guiding aspiring Jewish artists. Unfortunately, in 1909 he was rejected admission to an art academy in Saint Petersburg because of anti-Semitic laws. Consequently, he enrolled at the University of Technology in Darmstadt, where he started studying architecture. His early drawings, characterized by heavy outlines and soft palette, didn’t have much in common with his later pieces. Similarly, his illustrations for Yiddish children's books had visual elements of the art nouveau and folk symbolism, which had nothing to do with his later work. After the outbreak of World War I, Lissitzky had to return to Russia, just like his fellow artists Marc Chagall and Wassily Kandinsky. In the following years in Russia, Lissitzky was studying Jewish culture and producing Jewish art. In 1919, when Chagall founded an art academy, he hired Lissitzky as an instructor of architecture and graphics. Around the same time, the artist met Kazimir Malevich, who was another instructor at Chagall’s academy. Malevich was developing an abstract artistic style called suprematism, based on squares, triangles and other flat shapes and Lissitzky's encounter with this new style was the departure point in his own development.

After the outbreak of World War I, Lissitzky had to return to Russia, just like his fellow artists Marc Chagall and Wassily Kandinsky

Devotion to Suprematism by 1920 - Proun Series

In 1920, Lissitzky has already devoted himself to suprematism. However, compared with Malevich, Lissitzky was less Suprematist because he was using political symbolism quite often. For example, his famous propaganda poster from 1919, called Beat the Whites with the Red Wedge, was related directly to Russian civil war. Also, Lissitzky’s art was usually featuring architectural elements which were entirely absent in his mentor’s art. The artist has put a lot of efforts into creating his own interpretation of suprematism, which was indeed original and different from typical suprematist geometric compositions. His series of paintings called Prounen or Proun is the best example of this unique new style that Lissitzky has invented. The artist’s knowledge of architecture had a crucial role in Proun works, because of his experimentation with forms such as bridges and high-rise buildings, wherein he experimented with traditional architectonic forms, such as bridges and tall buildings. Lissitzky's goals was to use suprematism towards architectural renewal of Russia.[1] In the mid-20s, suprematism started to form two different sections - one was embracing various utopian concepts while the other one focused on more practical goals, such as the support of industrialization. When it comes to Malevich, he was interested in utopian ideals, while Vladimir Tatlin, whom Lissitzky made friends with in Moscow, was supportive of the latter, more practical form of suprematism. Even though Lissitzky’s philosophy was in line with concepts of the utilitarian group, he remained independent, not wanting to participate in this divide of the artistic movement. At the time suprematism started to wane and dissolve, Lissitzky returned to Germany as a cultural representative of Russia and started working as a graphic designer. He came up with some of the most innovative solutions for magazines and journal covers and he was also producing legendary Soviet propaganda posters, best known for their bold and modern designs. Lissitzky's architectural visions also got reinvented and reached new horizons during this prolific period of his career.

The series of paintings called Prounen or Proun is the best example of unique new views that Lissitzky has invented, based on suprematism

Propaganda and Art - Beat the Whites with the Red Wedge

Beat the Whites with the Red Wedge remains one of Lissitzky's best-known works. It is also one of his earliest attempts to create a truly bold mix of propaganda and art. This artwork was created as a support of the Red Army after the Bolsheviks started the revolution in 1917. The red wedge represents the revolutionary force, while the white part symbolizes the anti-communist white army. In this iconic piece, El Lissitzky has cleverly used colors which have a lot of symbolical value and significance in Russian history. The combination of red, white and black emphasizes the message already encapsulated in the title of this piece. Colors and shapes are great storytellers - the smooth walls of the white circle are attacked by the red triangle, just like the Red Army had faced the defensive White Army. These powerful color contrasts also create an uncertainty related to positive and negative space in the painting. In addition to the main red and white forms, there are also tiny geometric pieces resembling projectiles that go along with the text. In Beat the Whites with the Red Wedge, painting and typography are ingeniously fused in order to create a truly remarkable political statement.[2] This artwork is also an important precursor to Lissitzky's Prouns when the artist started focusing on three-dimensional instead of flat visual plains.

El Lissitzky wanted to celebrate through his art what he perceived as the supreme power of the Soviet state. This lead to his development plans for constructivism, which was an international art movement meant to facilitate designing of new city skyscrapers.These novel architectural constructions were guided by the suprematist idea that architecture shouldn’t be bound by gravity. [3] Even though Lissitzky’s constructivist visions for new buildings weren’t overly pragmatic, his designs were actually meant to be realized. Lissitzky’s ultimate plan was to construct so-called horizontal skyscrapers, buildings that contradicted the American custom of designing typical high-rise skylines. From 1923 until 1925, Lissitzky has developed ideas for a series of eight horizontal skyscrapers that were meant to be placed in intersections of the Boulevard Ring in Moscow. Each of these wolkenbügel buildings was envisioned as a flat three-story resting on three pylons. Lissitzky supported the idea that as long as people cannot fly, moving horizontally is a more natural solution, better than American-style architectural designs.

Through his horizontal skyscrapers concept, Lissitzky supported the idea that as long as people cannot fly, variants of moving horizontally are more natural solutions

During his later career, Lissitzky was often commissioned to design exhibition rooms. For example, he designed the space for Internationale Kunstausstellung art show in Dresden, Raum Konstruktive Kunst and Abstraktes Kabinett in Hanover, and he also improved the 1925 Wolkenbügel concept. My most important work as an artist begins: the creation of exhibitions, is El Lissitzky's note in his biography from 1926. [4] . Around the same time he was also creating displays for the Soviet pavilions at the international exhibitions, until New York World's Fair in 1939. His most important exhibit hall design was the All-Union Polygraphic Exhibit in Moscow, from 1927. On this occasion, Lissitzky was guiding an entire design team consisting of photographers and photomontage artists. In 1928, Lissitzky came back to Germany and visited Cologne in order to prepare the 1928 Pressa Show. Even though Lissitzky has organized and supervised many exhibitions throughout Russia and Germany, he didn’t have many shows on his own and his work was praised for its incredible influence on the entire art scene at the time. Lissitzky also designed and organized even less demanding, minor exhibitions, such as the Hygiene show in Dresden in 1930. Lissitzky has retained his enviable reputation as the true master of exhibition design and organization well into the late 1930s when his health started to deteriorate. His tuberculosis unfortunately started to take its toll and reduced his physical skills. In his final years, Lissitzky was dependent on his wife in the completion of his artworks. In the early 40s, his tuberculosis worsened a lot, but in spite of this he continued being a prolific creator. His last artwork was a propaganda poster celebrating Russian efforts in World War II. El Lissitzky died in 1941, in Moscow.

Even though Lissitzky has organized and supervised many exhibitions throughout Russia and Germany, he didn’t have many shows on his own

Throughout his career, El Lissitzky strived to transform Suprematism from its mainly two-dimensional to three-dimensional concepts, especially with regard to architecture. Even though only one of his architectural designs was constructed, many 20th-century architectural projects were inspired by Lissitzky’s bold and innovative approach. He was certainly a forward-thinking, visionary artist who has built an abstract, modern visual vocabulary in many different media, from graphics and typography to painting. Artists and architects who came after him, especially Walter Gropius, Mies van der Rohe, and Wassily Kandinsky continued to expand Lissitzky’s modern visual vocabulary made of simplistic elements such as form, line, and color.

El Lissitzky lived and worked between Germany and Russia.