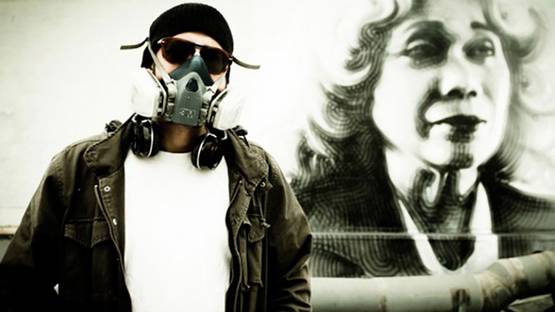 El Mac was born in Los Angeles in 1980 to an engineer and an artist. El Mac has been creating and studying art independently since childhood. He was inspired at a young age by classic European painters such as Caravaggio, and Vermeer and Art Nouveau symbolists such as Klimt and Mucha.  This was mixed with the more contemporary influences of graffiti and photorealism, as well as the Chicano & Mexican culture he grew up around. El Mac began painting with acrylics and painting graffiti in the mid ’90s, when his primary focus became the life-like rendering of human faces and figures.  El Mac has since worked consistently toward developing his unique rendering style, which utilizes repeating contour lines reminiscent of ripples.  Turing patterns and indigenous North American art.  In 1999 he began to paint portraits of his friends and anonymous Mexican laborers in public spaces throughout the American southwest, both legally and illegally.  El Mac also started painting large technicolor aerosol interpretations of classic paintings by old European masters. This led to being commissioned in 2003 by the Groeninge Museum in Brugge, Belgium to paint his interpretations of classic Flemish Primitive paintings in the museum’s collection. He has since been commissioned to paint murals across the US, as well as in Mexico, Denmark, Sweden, Canada, South Korea, Belgium, Italy, The Netherlands, Puerto Rico, Spain, France, Singapore, Germany, Ireland, the UK, Vietnam and Cuba. Some of his murals have become local landmarks, especially his collaborations with Retna, which combine Mac’s representational figures with Retna’s typography and designs. The majority of their collaborations have been painted in LA, though a few notable murals were painted in Miami’s Wynwood Arts district for Primary Flight/Art Basel from 2007, 2008 & 2009, including one painted on the Margulies Collection building.  Mac and Retna had an important exhibition together, “Vagos y Reinas: at the Robert Berman Gallery at the Bergamot Station in Santa Monica in 2009.  Alianza, a book documenting their individual and collaborative works was published by Upper Playground/Gingko Press that same year. Mac’s art was featured on the cover of Juxtapoz magazine in 2009 and again in 2012, as well as the cover of LA Weekly for a feature on the Seventh Letter collective.  In the last few years El Mac has had successful solo exhibitions at Fifty24SF Gallery in San Francisco (2009), and Joshua Liner Gallery in NYC (2010).  In 2010 he also painted a large mural on the museum of contemporary art (MARCO) in Monterrey, Mexico as part of the Seres Queridos project.  In 2012 he painted a large mural in Havana, Cuba for the 11th Havana Biennial sponsored by the Cisneros-Fontanals Art Foundation. El Mac continues to balance his love of painting large-scale public artworks around the world with his meticulous and time-consuming creation of indoor works.  He aims to uplift and inspire through his careful, perfectionist renderings of both the sublime and the humble.  He lives and works in Los Angeles.