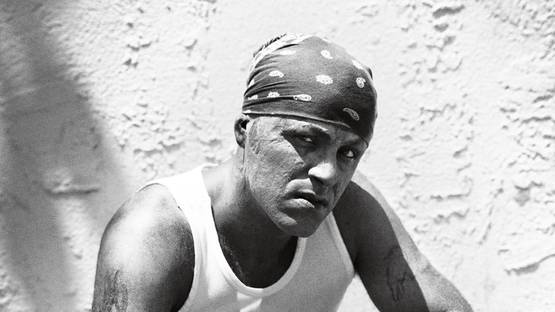 Elad Lassry in an Israeli-American artist born in 1977 in Tel Aviv, Israel. Lassry attended the California Institute of the Arts for film and visual art, receiving his BFA in 2003 and his MFA from the University of Southern California in 2007.

Starting with popular modes of production such as magazine advertising, Lassry uses silk-screening and photography to revive iconic art-historical arrangements, such as the pairing of mother and child or the arrangement of fruit, disrupting their original harmony with geometric displacements or a palette of bright colors. His chromogenic color prints, still life compositions, photocollages, and studio portraits of friends and celebrities, never exceed the dimensions of a magazine page or spread (35 x 28 cm) and are displayed in frames that derive their colors from the dominant hues in the photographs. Lassry often displays his photographs beside 16mm film projections in a continuous loop on the wall. In early 2012, Lassry staged a warm-up with dancers from the New York City Ballet at the Hayworth Theater in Los Angeles. In September of 2012, he debuted Untitled (Presence) at The Kitchen, an exhibition and corresponding performance under the same title.

One year after graduating from the University of Southern California, Lassry mounted a solo exhibition at the Art Institute of Chicago in the Film, Video and New Media gallery. The exhibition consisted of two films, Untitled (Agon), 2007 and Zebra and Woman, 2007. Solo exhibitions of Lassry's work have since been held at, among others, The Whitney Museum of American Art, New York and Tramway, Glasgow. His first major monographic exhibition in the United States, Elad Lassry: Sum of Limited Views, was on view at the Contemporary Art Museum of Saint Louis and subsequently travelled to Kunsthalle Zürich, Switzerland. In conjunction with the 2010 show Sum of Limited Views, the Kunsthalle Zürich published the exhibition book, Elad Lassry. At the 54th Venice Biennale, Lassry debuted the film Untitled (Ghost), 2011, along with several photographs in the ILLUMInazioni - ILLUMInations exhibition at the Venetian Arsenale. For the High Line in 2012, Lassry created an alluring image of two young women, both dressed alike, gazing out of two small portholes into a sea of green.