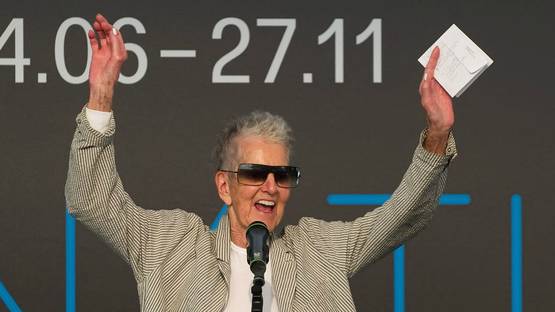 Reconstructing only from the memory some of the iconic artworks, Elaine Sturtevant achieved recognition for these repetitions borrowed from the other artists, challenging the ideas of originality and ownership. Creating in the realms of Neo-Dada, Conceptual, and Appropriation Art, her works are not merely copies, considering her aim was not to achieve pure duplicate. Instead, Sturtevant exploited her extraordinary memory and using a mimicry she actually explored “the silent power of art” or appearances beyond its surface, striving to reveal the underlying conceptual structure of the artwork. From 2000, the artist turned to film and video, advertising and internet-based images with the aim of producing reflections of our visually saturated culture.

Early Career and Struggle for Recognition

Sturtevant was born in 1924 in Lakewood, Ohio. She gained her education at the University of Iowa earning a bachelor’s degree in Psychology and master’s at the Teachers College of Colombia University. She has also studied at the Art Students League in NY. The first years of her artistic life in NY were marked by the use of reproductions of the works of her contemporaries which she did for the first time in 1964, achieving the pieces that could be identified as an original and intriguing the viewer to ask himself what is he looking at. She had no problem to appropriate some of the most iconic artworks, exploring the issues of originality, authorship, and the interior structures of art and image culture. Inverting the visual logic of Pop Art, she created her versions of Andy Warhol’s Flowers, Jasper Johns’ Flags and Frank Stella’s Black and Grey paintings, following the same approach later after moving to Paris, when she processed works of Marcel Duchamp, Joseph Beuys, and Anselm Kiefer [1]. Although at the beginning the artist has been faced with hostility, some artists she borrowed from were not angry, but even helped her by giving her instructions and showing technique to create better copies. As the woman who imitates her male colleagues, Sturtevant passed unnoticed in the history of postwar American art. But, the fact is that her imitations were much more than just copies, they were studies and analyses of chosen works and Sturtevant’s style should be comprehended as the medium for the better understanding of art.

At the beginning, her work was accepted as a wit and interesting way to encourage the viewer to ask epistemological questions. Sturtevant’s first solo exhibition has been held in 1965 at the Bianchini Gallery in NY where she showed, beside Jasper John's flags, Oldenburg's soft sculptures, and a Rosenquist drawing, Warhol’s Flowers, a series of silk-screen prints that he revealed to the audience a few weeks before [2]. Constantly facing the misunderstanding, Sturtevant decided to take a break from art in 1974 and for the next ten years, she produced little, re-emerging in 1986 with an exhibition at White Columns in NY when the world apparently was better prepared for her. The understanding of her ideas lies in the relationship between repetition and difference – or how to make people look beyond the surface. As the artist herself said: “The work is done predominantly from memory, using the same techniques, making the same errors and thus coming out in the same place.”

Sturtevant’s imitations were much more than just copies, they were studies and analyses of chosen artworks

In 1990, Sturtevant decided to leave the United states and move to Europe. It was a kind of escape from the place where people had mostly negative reactions to her approach, including the artists whose work she appropriated. Unlike in her country, European museums welcomed her work, devoting her exhibitions. In 2000, she shifted her interests to film and video, advertising and internet-based images, exploring the current culture overladen with pictures. Instead of repeating other people’s works, she focused on the constant repetitiousness of experience in the post-internet age. During the last few years, there has been a drastically increased interest in her work which became the subject of numerous shows including the Museum für Moderne Kunst in Frankfurt am Main, the Musée d'Art Moderne de la Ville de Paris, the Kunsthalle, Zurich, the Serpentine Galleries in London, and the Moderna Museet, Stockholm which organized the retrospective in 2012 named Sturtevant: Image Over Image. Commenting her creative expression in this new age, the artist said: “What is currently compelling is our pervasive cybernetic mode, which plunks copyright into mythology, makes origins a romantic notion, and pushes creativity outside the self. Remake, reuse, reassemble, recombine – that's the way to go.” [3] From the 1980’s when appropriation became usual and widely accepted technique among young artists, Sturtevant’s work has found its true recognition making a powerful influence on these new generations.

In 2000, Sturtevant shifted her interests to film and video, advertising and internet-based images

Remaining Faithfull to the Same Ideas

The essence of her work has not been changed for more than five decades, reflection, thinking, and analysis were present in her paintings from the 1960s to the latest videos and installations. For the last two decades, she was truly dedicated to the research of current events, focusing on the political implications of cultural images that were shown through her multi-screen video works. Sturtevant died on May 7, 2014, in Paris where she lived and worked since the early 1990’s. She was awarded The Golden Lion award for Lifetime Achievement at the Venice Biennale in 2011. In 2007, an original Crying Girl by Roy Lichtenstein sold at auction for $78,400, and in 2011, Sturtevant’s canvas reworking of Crying Girl, the only Sturtevant painting of its kind in existence, sold for $710,500.

The artist is represented by Galerie Thaddaeus Ropac.