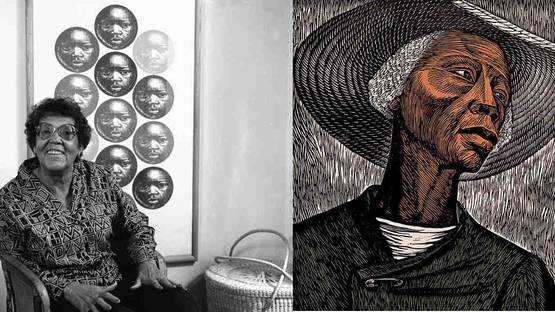 Elizabeth Catlett was a sculptor, painter, and printmaker well-known for producing politically charged black expressionistic sculptures and prints in the 1960s and the 1970s.

Catlett was born on April 15, 1915 in Washington, DC, and attended Dunbar High School. She received a scholarship to study at the Carnegie Institute of Technology in Pittsburgh, PA, but was rejected by the institution because of her race. In 1935, Catlett earned a BS and graduated cum laude from Howard University School of Art, in Washington, DC. She went on to graduate with an MFA from the University of Iowa in 1940, before moving on to study ceramics at the Art Institute of Chicago, IL. In 1942, she studied lithography at the Art Students League in New York City, and then, in 1943, she joined Ossip Zadkine to study sculpting. In most of her works, the artist combined fundamental elements of African traditions with the traditions of African Americans and western Mexico.

Catlett was originally enrolled to study design, printmaking, and drawing, but later changed her major to painting, due to the influence of James A. Porter, and because Howard University did not have a sculpting department at the time. She taught for two years in North Carolina, but quit due to low salaries paid to black teachers. She was the first student to graduate with an MFA at the University of Iowa, and was greatly influenced by Grant Wood, who produced great paintings of the American landscape. She sculpted Mother and Childin 1939, and a year later it won her first prize at the American Negro Exposition in Chicago, IL.

Catlett was involved in a number of exhibitions, including Prints & Drawings, at Stragow Gallery, New York, 1998, and Wood Sculpture, at June Kelly Gallery, New York, 2002. Catlett received a number of awards, such as the Lifetime Achievement in Contemporary Sculpture Award by the International Sculpture Center, in 2003. She is part of many collections around the world, including those of the High Museum of Art in Atlanta, GA, the Museum of Modern Art in Mexico, and the Library of Congress in Washington, DC.

On April 2, 2012, Catlett passed away in Cuernavaca, Mexico.