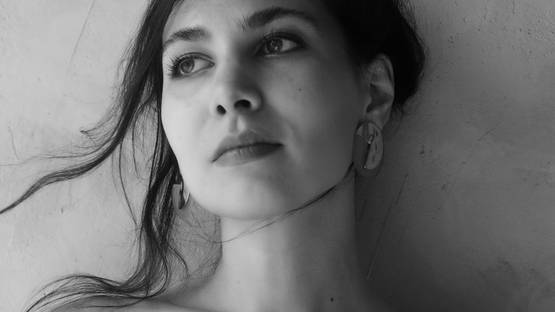 Born in Nalchik, Russian Caucasus, Ellina Zhanu began painting at the age of 25 under the guidance of the local prominent artist. In 2016, she was chosen (from more than 100 applicants) by Mihail Chemiakin, the famous Russian nonconformist artist, to participate in his exhibition, held at the National Museum of Kabardino-Balkarian Republic. Two years later, on her 30th birthday, Ellina had her first solo exhibition. Titled “Ellinizm: restarted,” it was held at the Art Center in Nalchik. Quite unconventional and original, the opening consisted of famous bloggers, theater actors, artist’s friends, and the artist herself reading short stories written by Ellina. She also performed R’n’B, rock, and jazz pieces, accompanied by local musicians. The exhibition, supported by honored artists of the region and enriched by inspiring speeches and live music, was a success and a subject of great interest for the local community. In 2019, Zhanu was a special guest participant of the Roommates exhibition, an event organized to support young and promising artists of the region. For the show, she created illustrations for both the published collection of musical miniatures performed now in all Russian schools and the poetry collection to be presented soon by author in Russia and Europe. She was also named as the creator for a series of graphic illustrations in film credits of a local documentary director.